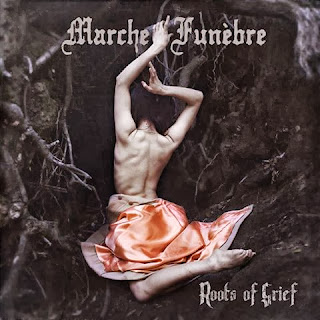 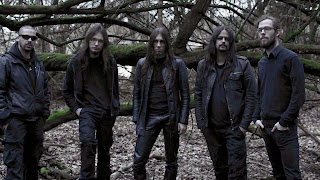 Like many cases recently, I was not aware of a band called Marche Funèbre until they sent me the promo for this album about two months or so ago. I've been covering a lot of death/doom albums this year and I figured I'd give this one a listen just to add to the list. I've been surprised with what the genre has produced this year, so I had some nice hopes for this one.
Unlike the last couple years I've been reviewing albums, this year has produced several exceptional records from the death/doom genre (doom in general really) so it didn't really shock me when this record actually turned out to be pretty well done, at least musically. Unlike several other records to emerge from this genre this year though, I would say that this band has crafted one of the more diverse efforts I've heard. Yes, the album and band certainly are rooted within that death/doom genre and while complete stylistic departures shouldn't be expected, there is flirtation with other sub-genres throughout. The breaks into traditional death metal as well as funeral doom definitely kept me interested. I mean, chances are you're not going to be all that surprised by what you hear on here, it's all been done before, but I thought that the blending of sub-genres was pretty solidly done and was definitely entertaining. There were times when there was definitely some early Opeth coming through in their sound on a couple of tracks which was quite nice to hear. In terms of the production, I realize we're talking about a band who's still in the early stages of their career so they might not have the money for a huge production, but it could have been better. I think that the bass tone is pretty shaky at times and sticks out a bit more than I would have liked from what the guitars are doing. It's not that the bass is badly played mind you, it's just that the tone doesn't really sit with the tone of the guitars all that well.
With all that being said however, I just can't praise the clean vocals on here. The death metal growls are perfectly fine, I have no qualms with them at all. The clean vocals however drift between tolerable and just downright awful. At their best, they can sound a bit like Jonas Renske from Katatonia, but unfortunately the majority of them are completely cringe worthy. A track like As In Autumn is rendered nearly unlistenable because of how bad the singing is. It also doesn't help the fact that the clean vocals are placed at the very front on the mix and nearly overpower anything else playing underneath them; yet somehow the growled vocals are at a normal volume and blend in nicely with the instrumentals. I don't think he's necessarily a bad singer because there is evidence on here of him being able to write some melody lines that do work and in which his voice is clearly well utilized, the main melody on Nothing to Declare is particularly well in my opinion.
While I do think this is a solid album overall, the singing was definitely the biggest weakness on here and could very easily turn people off. If you've been known to enjoy some diverse doom bands in your listening patterns, I don't see any reason not to at least give this album a shot. So, not great, but a decent little record. Hopefully the next release will see some improvements in at least a few of the areas I have a problem with because I think if things were tightened up a bit more the band's next record could really be something special.
Overall Score: 6.5
Highlights: L'avenue Des Cœurs Passés, Roots of Grief
Posted by maskofgojira at 4:58 PM