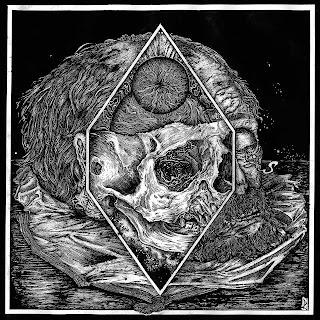 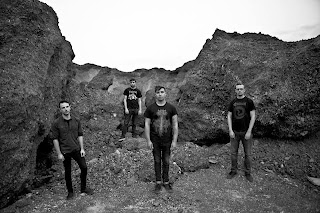 I first stumbled across this album on Cvlt Nation a couple of months ago and was very struck with its artwork. I liked the grittiness of it and the fact that there were only two songs that were both pretty long I thought was pretty ambitious so my attention was definitely piqued. However it's taken me this long to finally get around to covering this - was it worth it?

The raw, atmospheric production tone that you'll hear on this record does justice to the slow and brooding nature that this band play. It sounds like a band playing together in a cave or something, but it's not sloppy and things aren't messy sounding - cohesive is the word. As the band sound like they've been playing together for a good while, these two tracks flow from droning powerchords to doom metal chugs and even to more melodic pastures. The climaxes are big and melodic sounding black metal parts which are in contrast to the starker and droning doom metal passages that make up the majority of this band's sound (from what I can make of it on here anyway). I don't think it will shock anyone to hear that the seventeen minute Acceptance is the highlight on here - showcasing a little bit of everything the band can do. It's a pretty damn good chunk of time the band are using here but each and every second of it they use to the fullest extent they can and boy if it doesn't pay off big. I think what grabbed me most about the song was just how energetic the band got during the middle section of the song where it sounded like each member was just going off - then the song dropped into a pit of droning chords and feedback. Awesome!

Overall, it's a solid little release with two songs that are very well crafted and that I enjoyed quite a bit. There's still some work to be done in perhaps fine tuning and tweaking some of the ragged edges of their sound (not the production) but I think that these guys do have something here. Definitely be on the lookout for these guys cause based on this, I'm very much looking forward to their full-length.
Overall Score: 7
Highlights: Acceptance
Posted by maskofgojira at 2:43 PM