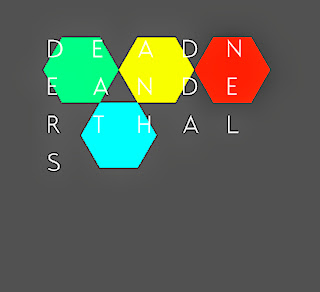 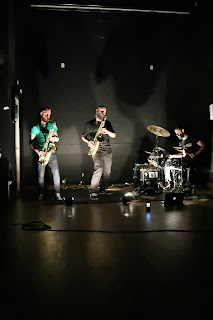 I did a short little review earlier this year concerning the jazz outfit Dead Neanderthals for my coverage of Utech Records. Surprisingly enough, that post got quite a lot of attention and the band let me know that they were putting out this release and asked if I was interested. From my review of the album you can assume my answer, but this turned out to be quite a different beast than their Utech record.

Featuring the addition of Colin Webster on saxophone, this record starts off pretty damn intensely with two sax players spinning lines around the frenetic drum work. It's a lot to adjust to when you first press play on a record but opener, There was a great battle..., is a pretty short track that does eventually settle into a calm for the second track, Weapons drawn, blood spilled.... Though to be fair, if you know anything about this band or the avant-garde side of jazz music, you'll know that even when the dust settles after a manic burst, it never really comes all the way down. While the second track may not match the same level of sear intensity as the opener, it is just as eccentric sounding with both sax players starting on their own and eventually settling into an off-kilter improv harmony sort of thing (if that makes any sense at all...). It's quite odd sounding to hear them both aiming for the same line but one being slightly off in execution, and then the other would be. Not sloppy mind you, but very unsettling (but in a good way).

What is perhaps the most interesting aspect of the record though is how the entire thing just comes down after the first two tracks; and I don't mean the entire record just stops being crazy and whatnot, but it's like there's a suck once track two happens and all the energy in the room is just seemingly sucked right out. The middle third of the record features the two longest tracks and they are by far the most engaging because the energy is more restrained, more contained if you will. It's not, crazy always, start slow then go crazy again, manic energy like that, but it feels more like they're starting slow, minimally and slowly building to a more gradual climax. It isn't an explosion of energy as much as a stream of it. They're not so much happening at a single time that it feels like you don't know what to grab onto, but more like these players are keeping things down and held back so they can exercise a more melodic side of their playing. The final third section of the record brings back the frenetic tendencies but balances them out with more of that melodic side (so it's an even blend of the two first thirds).

Overall I think it's a pretty solid little record that is definitely more palatable than their release for Utech earlier this year. It's got a little bit of everything for those who happen to like jazz music, whether it's the more spastic and crazy side or the restrained and melodic one (or just plain weird avant-garde stuff). Not a masterpiece but definitely a must listen for all jazzheads this year.
Overall Score: 8.5
Highlights: Both sides fought bravely..., And in tears... of course.
Posted by maskofgojira at 6:43 AM