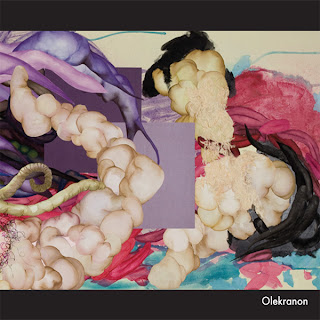 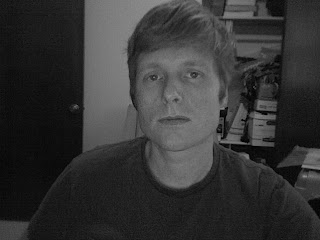 Truthfully I was not aware of Olekranon before being sent this album. I wasn't even aware that Inam released anything beyond Sujo's stuff, but receiving this in the mail one day definitely surprised me. Being the side project of the interesting Sujo, which I only found out after doing some looking into the project, my attention was definitely gained.

Unlike the music I've become accustomed to from (I guess you could call his more well known project) Olekranon does away with most of the metal ideas that make up the foundation of Sujo's sound. In it's place you have a more interesting replacement of electronic and noise music. Noise has been a part of Sujo's sound for the majority of recordings I've heard from it, but this takes things to a more logical level. Dealing with a more beat based sound, the harsher electronics and noise aspects of this record come out a bit more expectedly, with distortion popping up through various melody lines and beat echoes and all that sort of stuff. I don't mean to make that into a negative because what's on here is well done and arranged in such a way that makes it more manageable to take in and absorb. It should be said that the electronic side explored on here isn't so much trance of house but more IDM, industrial, and dark ambient - just so there's no confusion as to what this actually is.

The way these pieces are constructed so that certain elements come out more than others is rather well done. Some tracks, Nine Streams for example, do make use of more of a traditional electronic music sort of construction, moving from a heavy beat into more ambient territory - but it's well done, while a track like Coerced takes an almost Nine Inch Nails-esque industrial tone. That's obviously more on the accessible side. Tracks like Crooked Wheel, Severed, and Delicate Times take on more of that dark ambient and noisier sound that is probably on the more abstract side of things. It's not for everyone, and this is, in my opinion, still a pretty hit-and-miss record. The track lengths vary meaning you'll get a more substancial track or two then a short one that feels more like an idea than anything. Honestly, I have to say that I was drawn to the more accessible tracks on here, especially a track like Marionette which sort of feels like a Sujo B-side, but is still pretty damn good. But that's just where my head was at in terms of how I was able to swallow down this album.

In the end I felt only slightly drawn to this album, there's some good stuff on here, but also some stuff that didn't really do all that much for me. I wish there was perhaps a bit more cohesion in terms of how the album was put together, it kind of just feels like a batch of tracks than a real album, but that's just me. It is what it is and I'm sure there are people out there who can digest it and really get a feel for it better than I can, and if you're one of those than definitely give this one a go.
Overall Score: 6.5
Highlights: Crooked Wheel, Coerced, Marionette
Posted by maskofgojira at 3:35 PM