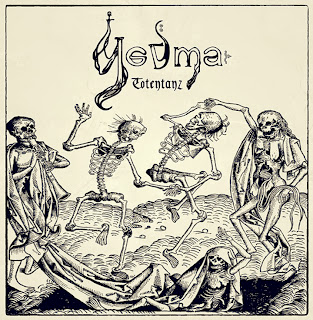 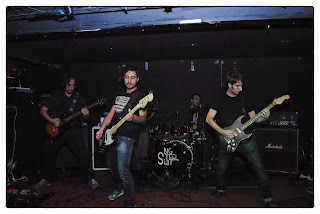 This was a strange little record for me because when I first received the message to cover it I was informed it was one sort of style by the band themselves. As you can probably assume it turned out to be quite different from that style that they would describe it to be. Actually, it was quite a bit more interesting than I think the band made it appear to be.

In all honesty, this is closer to stoner and blues rock (or metal...) than the average post-metal record or band is. While there are certainly some clues that tune you into the fact that this band probably does take just as much influence from the likes of Neurosis and Isis, it's much closer to instrumental stoner rock than either of those bands ever were. It has to be acknowledged that both of those genres, blues rock and stoner rock, aren't genres that I'm particularly fond of. Not that there's anything wrong with them of course, but they don't really do much for me - and yet this record is surprisingly badass. The idea of instrumental blues based music is something I find myself turned off to simply by mentioning it. It makes me think of a bunch of old guys jamming out to their favorite Black Sabbath, Led Zeppelin, and The Doors records (among others) with more distortion; but the six songs on here are actually really, really good. Despite being instrumental, they're never dull, uninspired, or even lackluster - it's heavy, dynamic, and at times pretty damn introspective as well and the latter two were things I would have never expected to say in reference to a band of this sort. Plus it's a really fun record to listen to because it just sounds like these guys like what they're playing. Sure, some of the riffs are typical but that doesn't mean you can't inject life into them if they're played with a sense of fun and vibrancy.

I guess the aspect in which I found myself most surprised with this album was simply in terms of how varied in terms of its dynamics were. There are plenty of ups and downs in the music from more traditional clean sections which do recall more of that post-metal influence, but also acoustic sections as heard on Podatus, a track which also made use of a surprisingly post-hardcore-ish kind of riff in its latter half. But really, this entire album was filled with surprises and exciting ideas that kept me on the edge of my seat. Perhaps it's this variety and stylistic experimentation that made me enjoy this more than I expected. Frankly, it isn't even until the last track, Liquescenza, that you get a full-on post-metal track the way you'd expect it to be. I don't think I need to stress how important all of these things are, strong riffs, progressive songwriting, stylistic variety, and a strong genre foundation - these are all aspects that I believe should be contained within a great record. Granted, every record may factor them in it's own order and prioritize them, but I believe all the best records (in metal and rock based music anyway) are the ones that embrace these aspects. Neuma do this almost too well on here. As far as I know, this is their first record and yet they wound up making a record that far surpasses many of their peers and hundreds of other bands in other "heavy" genres.

So yeah, in the end I was not only surprised by this album but I was really excited by it. This surpassed my expectations by far and it wound up becoming one of the biggest surprises of the year for me (sleeper hit of the year - maybe?). I can only hope that those of you who do check this album out find it as great as I do.
Overall Score: 9
Highlights: Bivirga, Liquescenza
Posted by maskofgojira at 8:39 AM