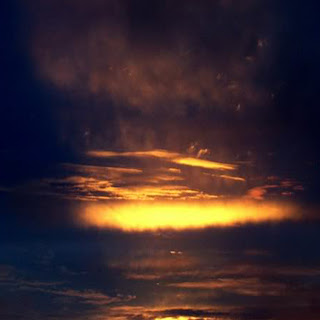 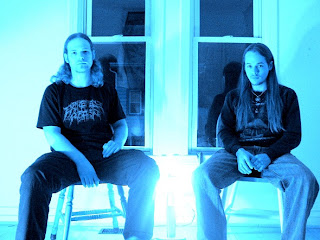 Since starting this blog I have heard enough "post-black metal" for a lifetime. I've heard good bands and I've heard bad bands, or projects, all of which I've attempted to come into with an open mind - with varying results. So when I got a copy of this new EP from a project I had never heard of that was labeled as "post-black metal" whenever I looked it up, I was a bit uninterested at first.
I honestly was not looking forward to finally playing this album and hearing what it would offer up. I've heard plenty of groups do this sort of black metal mixed with post-rock and hearing another one that was instrumental just didn't particularly interest me. It wasn't until I finally just gave in and realized that I had to cover this that I found myself not only being surprised by what I heard but also found myself enjoying it. The five tracks on this album are certainly post-black metal, post-rock influence black metal (or the other way around) but there was something different. Several things actually, the first thing that caught my ear was the production though. Unlike many of these instrumental projects, this was nowhere near as lo-fi as I expected. While it's far from being polished, it's well produced for sure. But after that it was all the songwriting, which really punched me in the gut. Seeing that the band site the likes of Katatonia, Thin Lizzy, Anathema, Pink Floyd, and Rush (among others) comes as no surprise after listening to this EP. Unlike many bands who simply do the quiet to loud dynamic (which is perfectly fine with me when done well) there's a middle ground on here that is explored. There's distortion but it isn't blistering, the music isn't blasting away in your ears. What's on here is much more melodic, much more precise sounding, in some instances, more progressive, than many, many other groups I've heard labeled in this sub-genre. A track like Through The Waves is not something I expected to hear from any band in this sub-genre. The hard rock influence comes through clearer on this closer than I would say on any of the other four tracks, while also still being very rooted in black metal and/or post-rock. If I did have to fault this EP though, I would say that the drums, at times, do sound a bit too fake for my liking, but even then I think they do what's required and don't stick out as much as many other drum machine using bands/projects.
Now, I'm not going to go and say that this is the best thing out there right now from this genre, I won't make that bold a statement even if it is true, but this is as fine a release from this sub-genre as I have heard in a long time. There's real talent here and that's something I didn't expect to say when I first decided to listen to and review this EP. But I seriously recommend checking this out if you're a fan of melodic, somewhat progressive leaning black metal or post-rock.
Overall Score: 8
Highlights: Permafrost, Through The Waves
Posted by maskofgojira at 5:05 PM