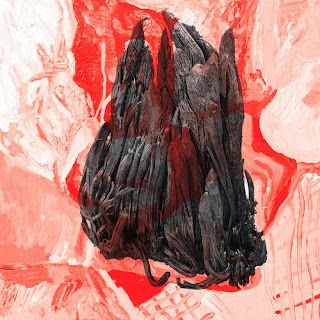 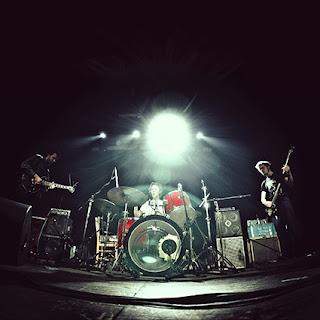 As far as experimental rock goes, I try and stay within certain bounds that I have set for myself. I learned years back that there is such a thing as going too far in experimental music, especially using the realms of rock music. I had never heard of either this band or the label that had sent it to me but I had a few more off the wall records I was being sent at the time (for some reason?) and just found myself going with it.

I just have to say that I love the press description of this band first and foremost. Saying that this band is like "two enormous dueling space-titans collide amidst the planets, hurling moons at one another, crunching their torsos across the hemispheres of Venus and Neptune whilst emitting a miasma of thunderous resonance," is nothing short of hysterical. I don't mean to offend whoever wrote that up but it is seriously funny stuff - but press releases for this sort of thing are funny anyway. But back to the music on here, which is certainly far from your typical "rock" formats. No big choruses to be found here. No huge sounding riffs either. What is huge is the sound of the band though. The band certainly make massive sounding tracks either through their droning sound or a more frenetic one. So you're essentially getting a drone group on one end and a mathcore/post-hardcore one at the other end, which sounds terribly frustrating when written down on paper I would assume. It's like, you're either going to get super slow and dull or extremely fast and quirky - I know plenty of folks who will read that and immediately take against this record. Hell, if I read I might question listening to this, but if you're still reading this I have to tell you it works rather well.

Let it be known that this is a rather raw sounding recording, though I have to tell you it still sounds pretty great. It's very clean sounding even with tones of distortion and feedback in the mix. I definitely give props to whoever engineered and mixed this thing cause it sounds great; and this is the sort of record that very easily could have sounded like crap as well. Noise rock by it's very nature comes from crap recordings for the most part and there are plenty of bands who make it work, but this record is all the better (and more palatable) because of it's cleaner production. To return to the hugeness issue that I brought up above, the record sounds big. Ok, what does that mean? For only being a power trio, and I'm assuming they don't have a budget anywhere near the size a band like Rush have, they manage to come out sounding like they're playing live. The guitars and bass just soar while the drums have an air and space to them that really works for this recording. When the guitar and bass are going from one end of the spectrum to the other the drums keep things anchored down, but it isn't mixed in such a way where it all blends into cacophony, it's clear that each instrument has it's place in the mix.

But for sure this will not be for everyone. For every track that is rocking and graspable, at least on a certain level, there's another that really goes for that experimental and avant-garde take. Songs like the opener, Flashing Teeth of Brass, definitely leans towards that drone metal sound while One Million Love Units on the other hand takes noise rock to it's improvisational side with plenty of stop-starts, feedback, distortion bleedthrough, and a real lack of direction (in terms of how the listener feels/is meant to feel not in terms of where the song is going). At times it's almost psychedelic in execution while other spots just feel like a bit too raggedy to really do anything, at least for me.

This was actually a solid record, which was definitely not what I expected to say when I first pressed play for the first time on this one. There's some real spots of genius on here that really make it worth while, I just wish the band had tapped into that side more instead of giving the listener the middle finger on a few tracks. If you're a fan of noise or experimental rock you'll probably be used to the middle finger at this point, but regardless, give this one a shot. It's surprisingly good.
Overall Score: 8
Highlights: Daughters I, Neukölln
Posted by maskofgojira at 4:58 PM