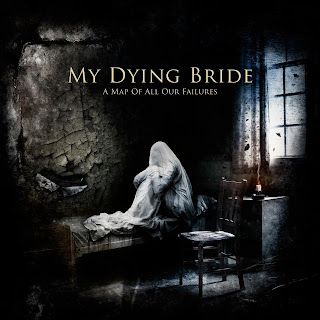 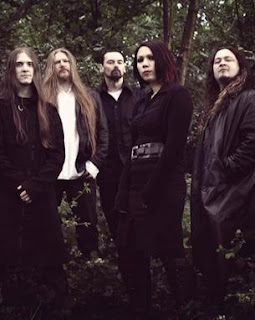 I've been a My Dying Bride fan for as long as I've listened to doom metal (in other words, they're one of the first bands I listened to and enjoyed). It's only been a couple of years since me first getting into them but they've put out some of their most luke-warm material yet. Though I haven't had any bad experiences with any of their material, I keep awaiting a modern masterpiece from them.
In the past, I had always said that My Dying Bride were my favorite of the Peaceville three, but as of recently, I think I'd have to change that to Anathema, whose recent material has been far superior in quality. I'm not saying that MDB's recent output has been bad, but it hasn't exactly been stellar either, and unfortunately this album does nothing to help their status. I know that a lot of people were very disappointed by Evinta last year, which was a bunch of old material re-written for classical instruments and spoken word; but I didn't actually have too much of a problem with it. It was definitely over long, but the material itself was fine, more darkwave and modern classical than rock or metal, but that was perfectly acceptable. I guess a lot of people took that release a lot more seriously than I did because there were several reviews I read for that album that actively criticized the choice to even put that out even though I always thought of it more as a stop-gap than an actual full-length release. Then there was the hate on 2009's For Lies I Sire, which I know several people really didn't enjoy, but I actually thought was perfectly decent and had a few songs that I come back to quite often. This is a full-length, and like I just said, it really doesn't do much to help their current situation.
Unlike some of the releases that were put out in the 2000s which brought back some more of the death metal elements that the band had used in their earliest days, this album features very little of that. In the past, I really haven't had any problem with the band not using death metal on a release, I'm perfectly fine just listening to the more melodic doom the band play with Aaron Stainthorpe crooning or talking over the top of it, but this just fell short in too many spots for my liking. There are a couple of more aggressive death metal bursts on here, notably on opener Kneel Till Doomsday and A Tapestry Scorned, but honestly, and I feel terrible for saying this but, they sound bad. They sound really half-assed, especially on the vocal front, where Stainthorpe sounds like he just isn't even trying. That might be a fault on the mixing job because his vocals do sound quieter during his growls, but it's really debatable which it actually is. Also, and this might just be me, there were several tracks where it just felt like the band had two short songs and just spliced them together, because there will be a short space of silence followed by a riff that sounds like it came out of a completely different song and I'm left wondering why they would write a song like that. But I have to say, on the plus side, closer Abandoned As Christ is a good song. This is the sort of song that the seven before it needed to be like. It's very melancholic and has a really bleak melody and some of Stainthorpe's best vocals on the entire album on it. Even though his performance on this track in particular is rather minimal, he makes great use of his time and doesn't overstay his welcome, which is more than I could say for a couple of the other tracks on here.
In the end I just found this to be a rather disappointing effort from the band. I've honestly been able to put up with their decline in quality thus far because there's always been at least a couple of songs on an album that I found it redeeming for, but there are just too few on here to even say that about it. It's not bad, and I still recommend the band to anyone who hasn't already heard them, but I would recommend a different album to start with first.
Overall Score: 6
Highlights: The Poorest Waltz, Hail Odysseus, Abandoned As Christ
Posted by maskofgojira at 1:17 PM