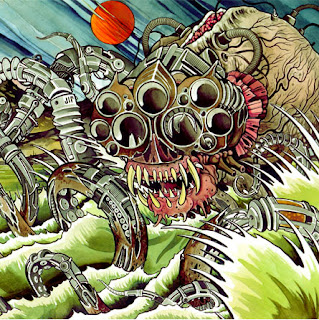 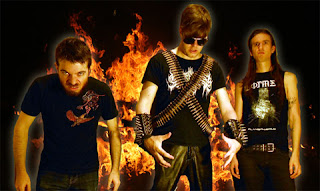 Though they were in existence years before, I remember hearing about Skullgrid back when it was released in 2007 and almost immediately had my mind blown away by it. It was one of those releases that just destroyed whatever I thought music could be and did things I never imagined at that time. But in five years what progress has been made?
Obviously, coming into this album expecting anything other than technicality that makes groups like Twisted Into Form or Spiral Architect look simple is a given, so, with that being said, I was actually surprised by the growth that I heard on here. Granted, I'm not sure how much growth could actually have been made to a group that was essentially made to push the boundaries of technical composition in metal/rock music, but I heard some significant shifts. First and foremost, I would say that this record leans a bit closer to the extreme side of the metal genres. Skullgrid, to me, felt like straight-up, uber technical, progressive metal, but on here there were several more spots that recalled elements of death, thrash, and black metal, with a couple choice moments drawing similarities to other projects Colin Marston is involved with including Gorguts, Krallice, and Dysrhythmia. Maybe it's just because I've become more acquainted with his other projects in the years since Skullgrid, but I can hear his influence all over these tracks. The extended tremolo section on Annihilvore was very reminiscent of his black metal projects and is a sound I personally find very pleasing (so big ups in there). Weasel Walter brings a far more intense drumming style to the band, which may be the reason for the amped up aggression on this album, featuring a less jazzy style that Charlie Zeleny had brought to the group on previous recordings. I really liked how the sound of this record was very clear and crisp sounding, every instrument could be heard, and I thought that the distinction between the tones from the bass and guitar notes of the warr guitar was very well handled. Probably my only complaint was that the drums were a bit overwhelming on Putrefucktion, but that's more of a compositional preference than a production one.
While I'm still not quite sold on the album cover, the music inside is certainly among the most interesting you'll hear all year. It's hard to say my brain has been scrambled since I've grown more accustomed to more technical varieties of metal music since first hearing the band several years back, but it's still a very enjoyable listen. If you enjoy more progressive or technical music, I highly recommend you look into this, but it is quite a polarizing sound and is certainly not for everyone.
Overall Score: 8
Highlights: Monolithic Destractions, Annihilvore
Posted by maskofgojira at 9:11 PM