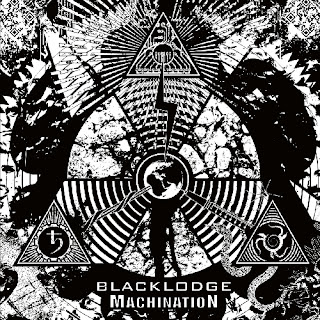 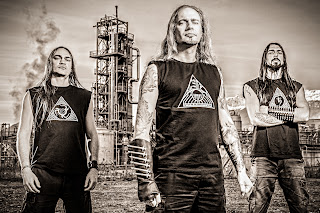 I've been following Blacklodge for years now and I'd like to think that I've been supporting them for just as long. This is my third review for the band, I remember reviewing Solarkult during my first couple of months doing this and then a few months later covering T/ME. Now they're on a much bigger label and with more press backing them, but did it change their sound?
The answer to that is no, well, at least in a negative sense it's no. The band have definitely shifted their sound to what I consider an even more aggressive one. Listening back to some of the band's older material, this album does ring with a harsher and less "rock" mentality and with more visceral tendencies. I say "rock" because in the past, while the band were always undeniably metal, their songs had that very straightforward sound that was very riff driven, not that they were a rock band. Songs also go through some more phases, especially in terms of the drums, with the band branching out into some more adventurous territory there. I felt like the band did kind of derive their sound from a certain sound that relied on noisy guitars and heavy, industrial beats, but those beats were somewhat one-dimensional at times, but on T/ME the band really did go for more of a progressive aesthetic which led to more of an atmospherically led record rather than the driving, riff-heavy sound on their first two full-lengths. This record sort of takes a spot in between those two sounds. The riffs and songs are very much the focus of this album, but as I stated above, there's more variation in terms of beats, which would only come from shifts in structure.
For me, this is easily the most mature record the band has released to date. With all the above factors coming together along with some of the band's strongest batch of songs yet, it just feels like the culmination of ideas has created something very strong. The band have always demonstrated that they knew how to write anthems, songs with heavy beats, catchy riffs, and a vocal line that just made you want to shout it at the top of your lungs, and while all the above indicators probably point to that being true on here, it actually isn't. As with their last full-length, the purpose (I guess that would be the best way to put it) of the anthem has decreased in priority for the band and they are instead writing songs that are more interesting while confining them to relatively short lengths to make them very digestible. A track like Industrial Temple MysticA is easily one of the band's most accomplished songs to date but still contains those simplistic and catchy riffs that will grab you and make you want to listen. There really wasn't a track on here I didn't like beyond opener TridenT which just didn't really do anything for me. Aside from that though, the album blends really strong anthems with more atmospheric and experimental ideas which is something of a dream combination for me when thinking about this band in particular. A track like Order of The Baphomet is probably the strongest combination of these ideas, with the beat shifting throughout the track from the typical slower pulse to more frenetic skittering but the riffs are memorable. I should mention that I'm really glad that the band did not experiment with dubstep on here, cause that could have very well ruined the album (but that's just cause I don't like dubstep - so take that as you will).
It's a very logical follow-up to their last full-length and will likely please old and new fans alike. I think it's easily the band's best work to date, and hopefully further expansion and progress will be made on future releases as well. If you like experimental and more industrial forms of metal, or those sub-genres mixed with black metal, grab a copy of this and listen.
Overall Score: 8.5
Highlights: NeutroN ShivA [Sun, Walk With Me!], Antichrist Ex Machina, Order of The Baphomet
Posted by maskofgojira at 11:25 AM