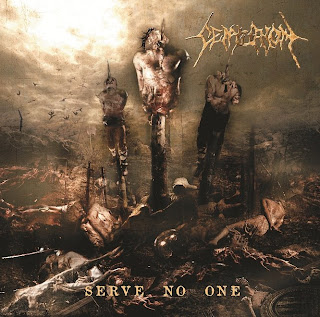 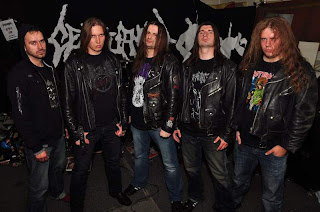 You know, no matter how much weird and experimental music is out there, sometimes all you want to do is listen to something aggressive and direct, like death metal. When I'm in the mood for that stuff, I could spend an entire day listening to it. That recently happened about a week ago and so I got to listen to a bunch of albums like this one.
Looking for brutality? Looking for intensity? Looking for death metal? Well this is the album for you, and it's under thirty minutes long. That's about how you could advertise this album since it essentially bare-bones death metal and nothing else. Sure, there are a couple of more melodic sections, a few guttural growls, some more thrashy riffs, but this is no-frills stuff and if you come in expecting more than that, you may be disappointed. It's really hard to try and sell this album to someone when it is basically so standard in so many ways. Yes, if you like death metal, you will like this, but it's hard for me to say that it stands out in any particular way. Sure, a track like Gateways to Condemnation has a pretty solid melodic intro but that soon gives way to standard death metal riffing and doesn't return to that melodic idea again. I almost felt cheated in that regard because the intro got my attention and then the band just did absolutely nothing else to differentiate the track from any other song on here. I realize this review is pretty short, but there really isn't all that much to work with on here, it's your stereotypical, modern death metal album. From the sleek production to the Cannibal Corpse worshiping riffs and bass lines, it does almost nothing to actually stand out from all the other death metal bands to put out records this year. Maybe next time they'll strike gold but not this one.
Frankly, I wish I could be more positive about this album, but it just sounds so average in too many ways for me to ignore. Death metal from start to finish and not much else. Like I said above, if you like death metal in general, check this one out, you don't have anything to lose by listening to this.
Overall Score: 6
Highlights: Gateways to Condemnation, Cut The Throat, No One to Serve
Posted by maskofgojira at 10:21 PM