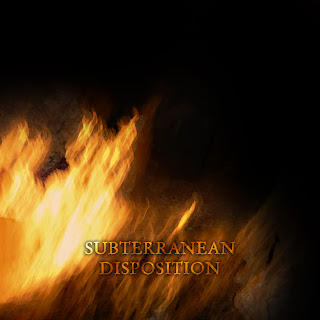 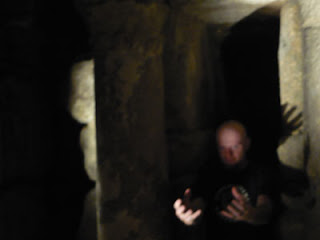 Terry Vainoras is a very interesting man for those who know about him. His experimental doom group InSomnius Dei put out one of the most interesting doom records of the last decade. I was really looking forward to hearing this album ever since I first heard about it last year.
I wasn't exactly sure what sort of doom based project this was going to turn out being, because if you've heard InSomnius Dei, you know that it isn't just a singular style that they're playing around with. Pretty much the only thing I came in knowing was that this was a record based in doom metal and I was hoping that Vainoras was going to do something interesting with it. When an album happens to open with the sounds of howling and screaming monkeys, you know that you're going to get something that isn't exactly typical. The music that follows is just as interesting and experimental as the use of those samples might indicate. For me, the entire record really reminded me of My Dying Bride, but in a good way. Or, to be more specific, it's sort of what I'd imagine My Dying Bride sounding like if they had continued to experiment after 1998's 34.788%... Complete (which I don't think is nearly as bad as people make it out to be). The entire record could have come off sounding like MDB clone if it wasn't for those experimental passages that really brought out unique character in the songs. I have yet to hear MDB experiment with stoner rock, post-rock, or industrial music in their music; and frankly, as much as I love that band, Vainoras does more with the sound they pioneered in the mid-90s than they have done in the last several years.
But as I always say, experimentation can only carry a band so far, and Vainoras knows how to write a good song. Each of the five songs on here has either a melody or a chorus that sticks with you and while it is something I did expect from this record, I don't think I could say with certainty that it was in the same form that I expected. The melody on Seven Sisters of Sleep is simply exquisite and quite elegant, in my opinion anyway. It's one of those rare melodies that reminds you why doom metal can be so addictive; and in the case of this melody it's spacey and trippy but also sort of progressive as well. But if that track was the project's melodic side, then The Most Subtle of Storms shows it's progressive side. Making use of various vocal effects and styles through the track in addition to an extended saxophone solo in its middle section, among other ideas, it proves to be the most adventurous track on the entire album. Frankly I did not care for the spoken word chorus of this song at all and found it rather irritating, but if that's the only thing I can say bad about the song, than I'd still consider it a winner.
Aside from a few minor gripes, I thought this was just a terrific piece of work. It's a brave album that takes risks and plays around with different ideas, but still keeps songwriting close to the vest, and it winds up succeeding because of it. If you like doom in any fashion, I definitely recommend you look this album up.
Overall Score: 9
Highlights: Seven Sisters of Sleep, Wailing My Keen
Posted by maskofgojira at 1:38 PM