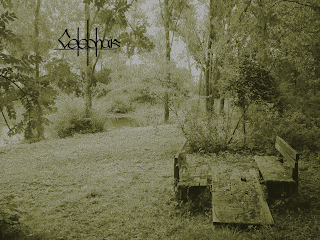 Last year I reviewed Celephaïs' debut, Becoming The Deceased, which was a really strong piece of work. Honestly, I had sort of forgotten about the project until this release came along. Someone just happened to send me a message that this was out and was interested in seeing a review for it, once I knew it was released, I knew it was going to show up on here.
Right from the get go, the main formula that this project had used on its debut has been shifted and that did catch me off-guard on first listen. The full-length was unabashedly a black metal album with nods to post-rock groups like Godspeed You! Black Emperor and Explosions In The Sky, and it actually did that style really well, but this release takes a slightly less traditional approach to that. This EP is actually quite heavily dominated by acoustic guitar led sections that, while they certainly still owe quite a lot to post-rock, draw from neo-folk as well. Wisdom is a completely acoustic track (with some nice ambient guitars thrown into the background for effect), but works well at carving a nice open atmosphere. It's a nice introduction since the title-track is a more epic affair, and demonstrates the less dark atmosphere that this EP happens to dwell in. It's a very soothing sort of atmosphere, almost calming in a sense, but not in a bad way, the black metal elements have not been removed entirely from the project's sound and still have their moments to shine on here, but, as a whole, this release is much less oppressive than the debut. One could say that the metal sections in question aren't even that close to black metal, with the ideas apparently coming more from post-rock and more melodic forms of metal. I sort of wish that the black metal element was a bit stronger, but I can't honestly say it would have benefitted either of these songs, just a personal preference.
I think it's a nice little release that shows the potential and range that this project actually possesses. I don't know if it's going to blow anyone away in its blending of genres, but it's a step closer to an original sound for this project. If you're interested in post-black metal, post-rock, or even neo-folk, I'd give this the thumbs up for you to look into.
Overall Score: 7.5
Highlights: Tir n'a n'Og
Posted by maskofgojira at 7:33 PM