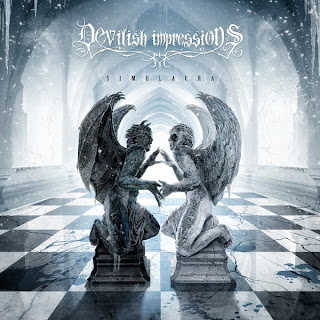 I've been following Devilish Impressions for several years now waiting for their next release to finally come out. Ever since I heard 2008's Diabolicanos - Act III: Armageddon a few years back, I've known this band had something special. So, after a couple of years of side projects and other detours, this new full-length finally comes out.
When I listened to Diabolicanos - Act III: Armageddon for the first time several years ago, I just thought it was a brilliant piece of work. It took the standard formulas and ideas from symphonic black metal but removed all the cheesiness and cliché and replaced it with a more interesting progressive edge. They took chances and experimented with more left-field sounding riffs and a variety of vocal styles from death growls and black metal screams to what could be called post-hardcore yells, and it all worked together. Listening to this, I somehow was left rather disappointed. I'm not sure what happened to the band in the time between records (I know there was a member change recently) but this sounds like a major step backwards to me. Even their 2005 album, Plurima Mortis Imago, wasn't this stereotypical and formulaic sounding. I'm not saying that there aren't good songs in here or that the riffs aren't proggy sounding in spots, but there's a real lack of adventure and experimentation that I felt made the band something special and without it, they sound like another modern symphonic black metal group. The orchestral work is nice and I'm sure a lot of work went into the arrangements, but I can't say that they're particularly revolutionary for the genre or anything like that and are merely above average at best. I hate to say this cause in the past the band really had something, but this just sounds like a poor man's Mirrorthrone.
To return to the actual songwriting though, the album does start off rather well with Icaros. This was the first song I heard from the album and I was actually really impressed with it. It wasn't overly complex or anything special, but the chorus was pretty solid and catchy, and I thought that maybe the rest of the album would follow suit, which unfortunately didn't happen. While I wouldn't say that any of the material on here is bad, I did find a lot of it to be rather unremarkable and not particularly special. It wasn't until Vi Veri Vniversum Vivus Vivi where I felt the band were doing something a little more interesting and drew my attention. That track took a much more technical approach that grabbed me from the moment it started and manages to also play with some ideas I haven't heard the band experiment with, though it is somewhat unfortunate that it is so close to the end of the album.
Well, like I said, it's not a bad record, just disappointing based on how much hope I had in the band based on their first two full-lengths. Maybe their next album will do something more in the vein of their older work. If you happen to enjoy symphonic black metal, this record will probably interest you, but I'd say that if you're into stuff that's more progressive to give this a listen as well.
Overall Score: 7
Highlights: Icaros, Vi Veri Vniversum Vivus Vivi, The Last Farewell
Posted by maskofgojira at 11:57 AM