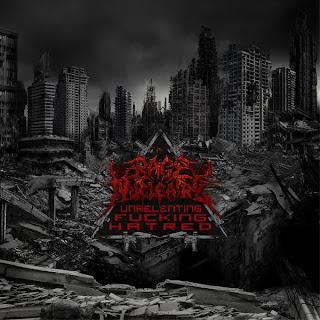 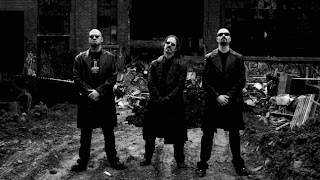 I was probably as surprised as anyone when Season of Mist announced the signing of this group, which happens to feature the legendary Lord Worm on vocals. I never expected Lord Worm to appear with another group ever again and his performances were resigned to the classic Cryptopsy records. I also didn't expect that his next big venture would be a black metal band.
Despite the title of the genre, industrial black metal can be quite a varied style to work inside, and so expecting a particular sound from it is rather futile. When I hear that term, I tend to think of a more polished sound, something closer to Fear Factory (but with black metal), which is certainly not what you will find on here. This is much closer to the sound of the first couple of releases from Anaal Nathrakh, with extremely distorted guitars, industrial noise covering the entire thing in a smog of sort of mechanical matter - giving it that very rough and yet sterile industrial kind of sound at the same time. The drums are done live, so they don't have quite the precision that groups who use drum machines have, but the performance is a more naturalistic one, with more variation than most groups in this style tend to have. Then, there's Lord Worm, who is as unintelligible as ever. Being someone who enjoyed his work in Cryptopsy, yet never understood a single word he was saying (even with the lyrics), he certainly lives up to his legacy on here. Though some might be a little thrown off due to his reliance (whether because of the style of the band or otherwise) on his higher screams and occasionally affected vocals and his sparse use of his trademark growl on here.
Despite all that the actual songwriting aspect to the group is quite well developed. Though there is a distinct lack of vocal hooks or variation, the guitar melodies are actually quite well done, often times falling somewhere between early black metal tremolo picking and more traditional heavy metal melodic phrasings, hear Fields of The Crucified. The synth work is also something worthy of note because, while it is not overly present on the first couple of tracks, when it starts to make itself known, it does work well. Providing either subtle atmospheric touches or, in the case of Endziel, a slightly more symphonic edge that sort of reminded me of the early albums of Lunar Aurora. Lord Worm's vocals are well done, but as I said above, his trademark growl is notably absent from the majority of this album which was something I felt disappointed by. That style of his was the draw for me into this album, and while he certainly gives a very good performance, I just wish that he growled more (a minor complaint I know, but still something that bothered me). In addition to all of that, Lord Worm has provided this album with some of the best song titles I've read/seen all year.
It was certainly a different sort of album than I anticipated it being, but I can't say the lack of variety really did it any favors. As someone who likes this sub-genre a lot, I do think the band have something, but the real test will be where they go from here. If you're in the market for a very aggressive and noisy black metal album, definitely check this one out.
Overall Score: 8
Highlights: Fields of The Crucified, 30 Seconds In The Killhouse, Unrelenting Fucking Hatred
Posted by maskofgojira at 1:28 PM