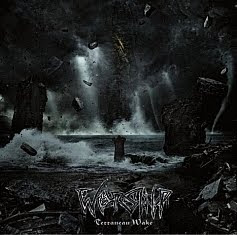 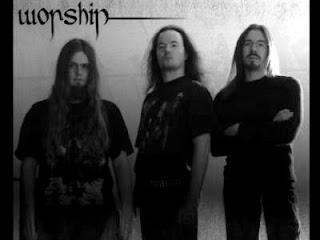 If you know about funeral doom, chances are you know about Worship. They are easily one of the most well known and respected groups in the genre (whether due to the quality of their material or their history). I remember hearing whispers about a new album from the group like two or three years ago (or something like that) and was utterly surprised when I finally saw this album.
It should be said first and foremost that this is not the same sort of album that 2007's Dooom was. Whereas that album felt like the band's most put together collection of tracks up to that point, making use of additional instrumentation including organs, bells, and piano, this is a much more stripped down effort. It feels more like a return to their early days where it was just droning guitars and monstrous growls. It's very open and sparse sounding, meaning that when I listened to it, pretty much everything that I heard was created by the four musicians in the band and their instruments - though I'm not going to deny the use of vocal harmonies and the end of End of An Aeviturne. I didn't hear much use of keyboards or other instrumentation, which not only feels like a return to their early sound for the band but also a return to the primal ethics and ideas of the funeral doom genre itself. So many bands, for better or worse, are experimenting with the genre and bringing in new elements, and sometimes the most primal exercise in the genre's parameters can be just as exciting. Now, I was sort of harsh on Aldebaran's Embracing The Lightless Depths album earlier this year because it didn't do anything I hadn't already heard before with the genre. The difference, at least for me, between this record and that one is that this album feels primal and very true to the genre's sound, where I felt like Aldebaran were just testing out the whole funeral doom sound and not really attempting to put their own stamp on it. Worship obviously have the established sound already.
Like most funeral doom records, there aren't any real "songs" on here, more long and drawn out compositions, which would apply even more to this record because it does fit together as a single listen. Not in the manner of every track connecting together into a single track sort of way, but rather each individual track has its place in the record as a whole. It's less of a singular focus and more of a divided one if you get what I mean. On a side note, Fear Is My Temple is probably the bluesiest funeral doom song I've come across in a long, long time (if not the first time I've come across such a song). The atmosphere is pretty consistent throughout, but I did find the aforementioned Fear Is My Temple to actually be quite brighter, almost uplifting in some spots despite following those moments with some of the darkest on the record (the power of contrast my friends). The record is pretty solid at hammering away at you with its rather oppressive, and depressive, atmospherics and heavy as balls bass (both guitar and bass in that regard) to the extent that on my first listen through I just had to turn the record off because I just couldn't handle any more doom and gloom.
If you're a fan of the funeral doom genre, you obviously already know about Worship and this will be at the top of your priority list, if not, go out and listen to them. I honestly don't think this is a masterpiece, but as a piece of stripped-down and primal piece of doom, it's pretty damn good. A must for doom fans, but if you're looking for something else a little different, a little slower, than check this out as well.
Overall Score: 8.5
Highlights: The Second Coming Apart, Fear Is My Temple
Posted by maskofgojira at 2:38 PM