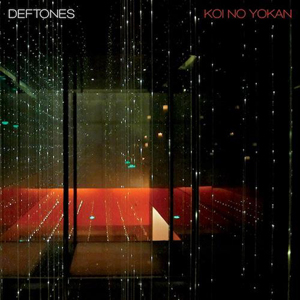 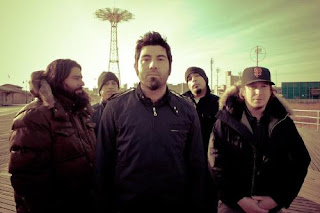 There wasn't any way I was going to miss this album. Since practically having a rebirth of popularity with the release of 2010's Diamond Eyes, the band has just blown up, and with good reason. This was easily one of my most anticipated releases of this year, did it live up to expectations or was it another disappointment?
After the success of Diamond Eyes, it's great to hear the Deftones continue on a similar path with just as much energy and passion as ever. For a while it did sort of seem like they were more interested in experimentation than writing good songs, but they really came back to it, though it unfortunately involved bassist Chi Cheng falling into a coma in the process. But, if you were like me and thought their last album was one of the best things they've done in years, then you'll like this one just as much. The band honestly hasn't shifted too much from the sound of that album but has actually modified it just enough to make it feel like a different record. From my point of view, this is a heavier record, but it has a lot more dynamics than the band has showcased in a while. Previously, the band has had songs that were heavy or songs that were mellow, but on here it feels more like a fluid balance between the two. Sure, tracks like the fantastic Entombed or closer What Happened to You? do stick to a more atmospheric and reserved approach, but the majority of the album does make a lot of use of the power from the 8-string Stephen Carpenter wields. A song like Romantic Dreams really does a nice job taking both the dreamy ambiance and the low-end heaviness of the band and carving out a nice middle ground. Though Chino Moreno does make use of far less throat screeches than he did on Diamond Eyes, his performance on tracks like Leathers and Gauze showcase some of his darkest melodies to date - even though the former does actually make use of some screams.
For me, despite being a heavier record than even Diamond Eyes, the record, I felt, was less accessible. Personally, it wasn't as immediate of an attach to this record as it was to the last one. I don't mean that the album is not catchy or anything like that, but it did take another listen or two (so around my second and third listens through the entire thing) for me to really get into some of these songs, and now those are the songs that I come back to. Obviously, this was just my experience though and I have read several other comments and reviews where people have latched onto it very quickly, if not on the first listen. From those very same comments and reviews, I've read sentiments that rang true with me after I had finally listened to the album that this was among the group's best material. Then, there was just the aspect to where I felt more connected to some of the songs on here than I have towards any other song the band has put out.
As much as I love how every member of the band really supports each other and it's never been about having one guy be the spotlight, I think that the real star of this album is Frank Delgado. His synth work on here is top-notch and I think that he's the reason why this album feels so cohesive at balancing heaviness with ambiance and mood. I found his role on the last record to be a bit more minimal, but on here he really shines and he brings out some really amazing textures in these songs. His work on the aforementioned Gauze is just as important as Stephen's guitar riffs. Even more minimal additions to some of the tracks on here seem to feel even more important to the majority of songs on several previous albums.
Once again, I think the Deftones have crafted and released another stellar piece of music that easily ranks among their best work. Perhaps it won't leave the impact that their last record did, but you'd be a fool to not at least consider this a worthy follow-up. If you have yet to listen to the band, this would be a great place to start, but you definitely don't want to miss out on this album.
Overall Score: 9.5
Highlights: Every Song Is A Highlight
Posted by maskofgojira at 2:13 PM