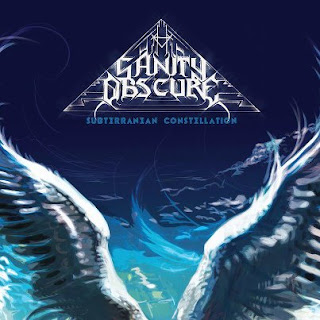 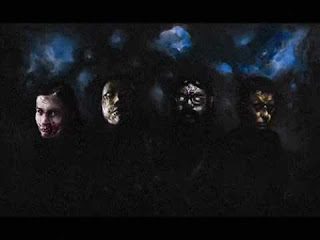 I'm always sort of surprised whenever I see a death metal band (of any sort) with a cover that uses rather bright colors. It really has nothing to do with the music, but it does always grab my attention. That, along with some rather unique guest spots really made this an interesting little album.
Coming into this, I sort of anticipated that it would be a bit more on the technical, let's say dissonant, side of death metal, but boy was I surprised when I finally pressed play. This is very bizarre sounding death thrash. The influences on here are quite obvious, late-period Gorguts, Death, and Atheist, so the riffing on here comes across quite angularly and dissonant in several spots, but is also quite harmonious as well. A lot of what's on here also varies in tempo, with a lot of it being quite slow or mid-paced rather than the standard high-speed blast-fest. I mean, there are certainly blasts on here, but definitely do not come into this expecting to be overwhelmed by them. There is also some really weird effects scattered throughout the album as well, with phasers popping up in the background of a couple of tracks. But possibly the weirdest effect on here is whatever was used on the guitar during the solo on Synergistic Permutations which made it drift between sounding like an actual guitar and a clarinet. It's seriously one of the weirdest effects I've heard all year. There are also two guests on the here which turn out to be the likes of Bruce Lamont proving some crazy sax during opener Dreams - Manifestations and Kevin Hufnagel providing a fantastic melodic guitar solo on Doublethink. I was really impressed with not only the performances of both guests but also how the band even got them to appear on here. They're certainly talent in here but it's just a bit odd. Granted, I really shouldn't be all that surprised seeing how abstract the band make their songs, drifting between the realms of intense jazz fusion and abstract death-thrash more often than most bands do in a career. I sort of wish this album was longer, because the band know how to write compact little bursts that don't get old even after repeated listens, and since the entire album is under twenty-five minutes.
I actually really enjoyed this, despite how short it was. I think that this band has a lot of potential and hopefully they can mine that well even further for their next release. If you happen to enjoy weird or interesting death or thrash metal, definitely check this little release out.
Overall Score: 8.5
Highlights: Rise of The Machines, Incarceration Divine, Doublethink
Posted by maskofgojira at 9:54 PM