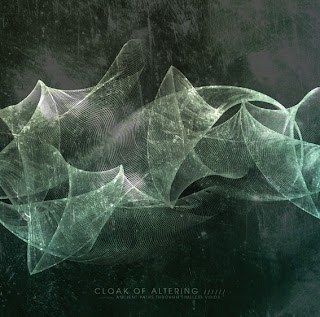 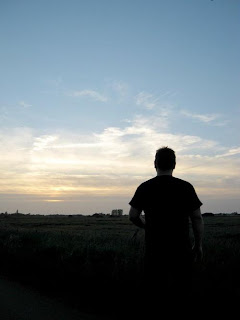 Beginning life as Ophiuchus back in the late 90s, Mories shifted the tone of that project last year into what is now known as Cloak of Altering. Releasing easily one of his most complex and disorienting albums (and that's saying something) with The Night Comes Illuminated With Death I wasn't expecting another album from this project for a while. But, once again, here we have another album from the project.
As my reaction towards the last Cloak of Altering album was somewhat mixed simply due to how overly complex I felt it was, I was a bit more cautious when I decided to listen to this. Mories had said in a post on one of his Facebook channels recently that he felt like this album was a more in the vein of its roots, fading back into ideas that were more similar to those of Ophiuchus and reducing the symphonic elements; and, for me, that's exactly what I thought when I first listened to this. There are still some more orchestral ideas present, but it's far more in line with the abstract electronic and industrial ideas from its birth place, which was something I found to be a rather pleasant surprise. This album is perhaps a lot weirder than its predecessor, but I found it much more enjoyable and immediate. It was less of a hassle trying to figure out what exactly was going on in a given track, and while I know that may have been some of the appeal of the first album to some people, I find the stranger electronic sound mixed with Mories' style of black metal to be a much more intriguing and engaging listen. Personally, I think it's less polarizing. Those electronic ideas found in pretty much every track on here might be more than enough to turn some people off because they are a bit sugary sounding at times, not so much in melody or anything but more the tone of the synths themselves. Having said that, I never felt like they clashed with the distortion from the guitars. Though I have to point out my distaste for the wubs (dubstep) elements on closer The War Has Finally Found Us, which I just didn't care for in the least.
While it's the electronic elements that keep me interested, it's the black metal bouts of pure hatred and aggression that keep me engaged. Despite how one dimensional some of Mories' projects can seem at times, it's been proven that while it may not be contained on every album, there is always a side that expands that sound into something that feels far more rounded and complete. That's the way I felt about the last album from this project, it was cool, but it's head was also too far up its own ass to realize that there weren't really any real songs on that album, just moments. This album fixes that problem, not entirely, but the majority of the time it works. Tracks like All I See Is Dead Stars or the title-track have that extra dimension to them by making use of more sparse synth dominated moments and slower guitar sections, but never forgetting it's black metal roots. Even when a track leans heavier on blasting aggression, the synths never threaten to overwhelm the listener with their presence, you can hear them, but they aren't competing with the guitars and drums (and sometimes the vocals) at the front of the mix for space. It's less of a cluttered mix is ultimately what I'm getting at here.
I actually really enjoyed this album and found it to be among Mories' better releases from this year. There's some really interesting ideas on here that really make me excited to hear where he'll take the project next. If you enjoy really experimental black metal or that genre's more industrial side, definitely check this album out.
Overall Score: 9
Highlights: All I See Is Dead Stars, Initiation Rites of Sector Five
Posted by maskofgojira at 5:22 PM