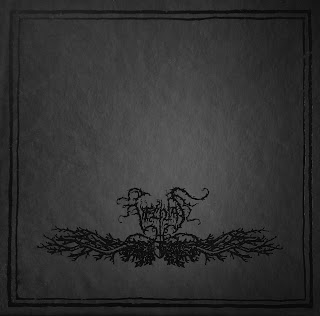 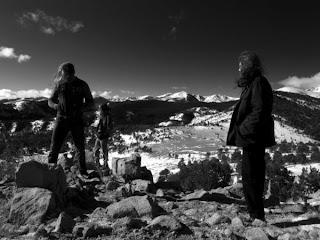 In the world of underground black and doom metal, Velnias is a group whose name means a lot to a lot of people. Their dedication to their craft and slow pace for releases has led to a strong and passionate fanbase. Earlier this year they created a Kickstarter campaign which resulted in the creation of this record.
Velnias is a group who have quite an interesting kind of style that to me has always been more inventive in its performance than its actual genre. At their core, the band has taken ideas from black and doom metal, as well as neo-folk and drone music, and blended them together, which even at the time they released their Sovereign Nocturnal full-length back in 2008 wasn't all that original a style. What makes their combination work so well is the way they play it and the way they have obviously recorded it. Recording this album to 2" tape nowadays almost seems like a waste when dozens of bands have taken to recording albums in their basements with pristine quality, but doing cutting it to tape does give this album various traits that could never come from a digital recording. That's where the performance aspect comes into play, the band play the style in a way that ebbs and flows between various styles, which is why they have been regarded as the not so distant cousins to Agalloch in some circles or even a successor to the sound Opeth started using on their first couple of full-lengths. It's the sort of sound that would still work on digital but wouldn't convey the same sense of emotion or atmosphere that tape does. There's a sense of coldness in the atmosphere while the recording itself lends itself to quite a warm and very authentic sound.
I have to admit that for all the praise that Velnias has gotten, I was never fully on board with all of it. Don't get me wrong, I certainly thought they were talented and were a cool band (still are by the way), but they just didn't have that special something that made me really invested in them the way several others around me were. Regardless of that I was going to listen to this album and cover it, but the first time I put this on I was struck by an album that had surpassed any and all expectations that I had for it. My expectations weren't even all that low due to the few comments and reviews I had read for it beforehand that had praised it for being a powerful album, but I never expected this sort of album. Each track moves from section to section, with the exception being the centerpiece Velnio Ugnis which happens to be a short acoustic interlude (that I wish was longer), without so much as a hiccup. Each track retains that chilliness that I mentioned above, but is able to convey that atmosphere differently in each of the tracks, from the melancholia of opener Velnio Maldavimas-Desolation of Grandeur to the more grandiose and triumphant Reclamation of Valour. What I find the most fascinating is the ability to convey such variation without relying on any sort of pristine sound, the guitar tones are raw and unpolished, the drums very natural sounding, and vocals that are primal and guttural. It's an album of heart and sorrow, and that isn't a combination often heard together all that often.
The end result is something quite powerful and at times rather overpowering. It's certainly the sort of album that should be commended for because you rarely see a band so dedicated to their craft that they even focus on the sound of the record as much as the songs themselves. Do not pass up on this record if you are a fan of black and doom metal.
Overall Score: 9
Highlights: Reverend Flames of Antiquity, Iconoclast
Posted by maskofgojira at 9:20 PM