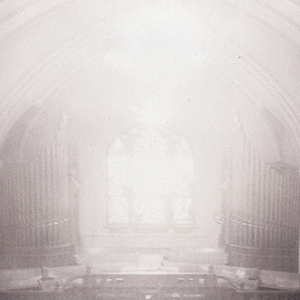 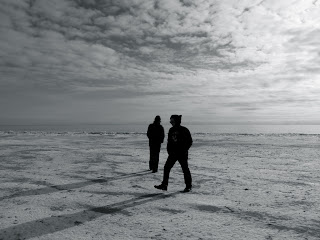 Ambient metal is a tag I can't say I've seen all too often, though when I have it's been in the context of more atmospheric metal groups like Katatonia or Nadja. When I saw this I assumed that it would be pretty much along those lines, which I don't think is a total stretch, but I was so wrong. This was far different than what I expected coming into it.
Duo Jim Field and Dorian Williamson certainly took an approach to crafting music that I certainly didn't expect. In the past, whenever I had heard someone mention offhand that a group could be called "ambient metal", it'd always mean, they were a metal band, but had atmospheric sections or were just more atmosphere-laden than your typical band, that's not the case on here. The duo in question here craft dense layers of glimmering ambiance through reverberating chords and droning feedback. Recorded in a church, the entire thing just sounds massive and feels like a constant ascent to a higher plane, in some respects anyway. Each track starts from the ground and builds up to something far more magnificent and beautiful, transforming the harshness of the distortion into something lush and spacious, as the noise just cascades over you and becomes a new entity all it's own. What's great is that even as the album moves along, there never appears to be a moment that is rehashed or redone, to the extent that the ear-piercing nature of the distortion that opens up Lux Luna is never repeated on other tracks (thankfully), and that really made each individual track stand on their own. Though it only struck me during this very listen while I'm writing this review, the album is paced actually very well to boot. The album moves from that extremely harsh and brutal opener towards something very soothing and melancholic, almost minimalistic in some spots, during its closer.
This is somewhat of a dual-natured album though, in the sense that those tracks which feature distortion tend to favor washes of noise to create this view of chaos and destruction while a track like Threnody for example is a purely clean track that is just an astounding piece of sonic architecture. Taking the formula I talked about above and translating it into a more ambient setting. Ambient in the sense that a track like the aforementioned Threnody is much closer to the likes of Stars of The Lid or Tim Hecker than opener Lux Luna is. The album is essentially the most balanced and true to form translation of ambient and metal coming together I've ever heard. I liked the mention of Sigur Rós in another review as well because they are a more comparable group to what this duo is carving out. Just as Sigur Rós are called "post-rock", their connection with rock is more in the fact that they use guitars, drums, and bass, IE. a rock band set up, more than the group actually playing rock. Northumbria craft majestic soundscapes out of both shimmering clean tones and harsh distorted ones but don't ever really take a particularly "metal" sound at any point on this album. Windhorse in particular is a very Sigur Rós-esque track that brought to mind several of my favorite tracks from the aforementioned band.
Hopefully if you haven't already checked this album out you'll do so now because it is one of those albums that really comes in and surprises you and surpasses any and all expectations you had for it. Now don't mistake that for me saying this is perfect, there are certainly flaws on here, but it is certainly a keeper. Fans of ambient and drone music will certainly dig this, but if you happen to be partial to the more ambient side of black metal or extremely slow sides of doom, I think you'll get just as much out of it.
Overall Score: 8.5
Highlights: Threnody, Black Sea of Trees
Posted by maskofgojira at 4:56 PM