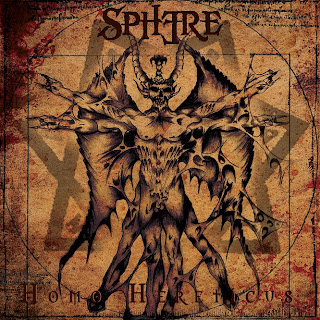 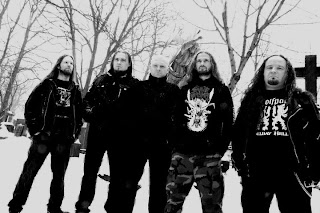 Sometimes there are albums that you just forget about and have to return to in order to remember why you wanted to listen to it. This was one of those albums for me. I've had this album on the backburner for several months already so I figured it was about time I get around to covering it.
I read a review for this album back around the time it was originally released, which is what originally got me interested, and it grabbed me because it made it sound like a modern death metal album that actually had some substance. A lot of modern death metal has become rather dull and bland, and in the case of newer groups, overproduced or under-produced. So it's become rather hard to find a band who has a production job that isn't polished nor muddy, and frankly, this is not an album that does that - as it does fall more on the polished side, but it's not going to offend anyone with its production sound. While that isn't exactly a ringing endorsement, it does work for the band because it really brings out all the aspects of their sound without one dominating. The bass is really crisp and clear (though it is definitely taking some cues from Cannibal Corpse in that area) while the drums are nice and propulsive. I do think that the drums sound the best on this record simply because they aren't overly clicky or flat sounding and they don't dominate the mix, but still have that sound that cuts through.
The band does take several chances, stylistically, on here which was rather interesting. They are a death metal band, yes, but there are some jumps into guttural pig-squeals on a few tracks, some well performed melodies, a couple of interesting grooves pop up on a couple of tracks, as well as some more technical bursts, among other ideas, but it's nice to hear a band so willing to experiment with their sound. It's not going to be enough to bring in the prog-heads, but if you like variation this will more than satisfy your appetite. I really dig how the band can go from a more groove based death metal song on one track, the title-track, to a more dissonant sounding (and black metal influenced) one the next, Holistic Paralysis. It also has to be said that these guys know how to write some killer riffs. It's been a while since I've found a record that I've wanted to headbang along with, and this one really made me want to (even though I was in school the first time I listened to it). The last half of the album really shows some potential for where the band could really expand into something special. Songs like Grave's Cold Darkness and Devils' Reunion definitely have traits that showcase a lot of promise.
Frankly, even though I enjoyed this album, I realize that those who are looking for something more unique might be disappointed by this. If variety doesn't interest you, this is just a damn fun album to listen to, so whatever floats your boat. Definitely check this out if you're looking for some solid death metal though.
Overall Score: 8.5
Highlights: Sadistfucktion, Holistic Paralysis, Devils' Reunion
Posted by maskofgojira at 12:19 PM