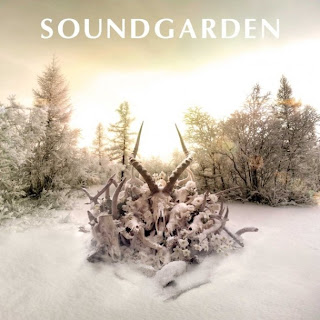 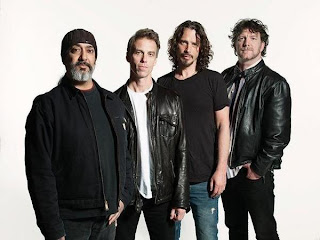 I'll be honest and say that I've never been particularly fond of the semi-metal groups that came out in the grunge era. Alice In Chains were a cool band and I put Soundgarden on a similar level of, I like them, but they're not a band I listen to a whole lot. When I happened to stumble upon this new album, I just sort of thought that I'd give it a listen and see what it'd sound like.
Pretty much as soon as opener Been Away Too Long began I was sold on this album. If you had asked me what expectations I had for this album coming in, I guess I would have told you that I would have liked to have heard a handful of good songs, since this thing is thirteen tracks long, but much to my surprise this thing was like hit after hit. It's been one of the few times this year that every single song has stuck with me after the album has finished, and that's saying something since I wouldn't even consider myself a big Soundgarden fan. This album is also an album that has a very strong foundation from the blues, and as much as I love a good old-school doom or the occasional stoner record, I don't listen to a whole lot of blues, but this album took all the great ideas from it without making it sound cliché or boring. I think that what's great about this record is that it's the sort of record that I think even a fan of modern radio rock and metal could get into despite not being all that heavy or aggressive. It's certainly calling back to more of an old-school style of hard rock, but has that modern sheen that makes it accessible to that wider audience. I think it's sort of a brave thing for the band to decide to take this route after bringing the heavy back on their Live to Rise single for The Avengers movie, they decided to take things back to a more old-school rock kind of vibe where it's all about songwriting over heaviness. I've always thought Chris Cornell had a good voice, but he really sounds in his element on here. I know that his adventure into pop on his last solo record, 2009's Scream, wasn't exactly a success, but if that record was necessary for him to eventually make this record, I can certainly live with that. I can't think of a single person that wouldn't accept a flop if it wound up leading to a great album like this one.
In addition to all of that, the band know how to make each song stand apart from others in tone. There's just something on every song that makes it feel fresh and interesting even though these are very simple songs that don't divert from the pop structure. There's a clear distinction between pretty much every song on here, from the doomy Blood On The Valley Floor to the highway swagger of Attrition and the uplifting acoustic rock that is Halfway There. There's also some interesting additional instrumentation on some songs as well which sort of caught me off guard, like what sounds like some hand percussion on Non-State Actor or the horns and sitar drone on A Thousand Days Before or Black Saturday. They're not huge, and I can't say that I even noticed them on my first listen, but they just add that little extra something to those songs that it would seem silly to say they're irrelevant. Of course now that I've brought them up, everyone reading this will try and pick those things out, but I think it's important to not try and find those things consciously, because then you're distracting yourself from the power of the song itself, and there are plenty of songs on here that are written from a rock band only kind of vibe, where it's just the four main guys playing the song with nothing else added in, and those work just as well as the tracks with the more subtle elements. It's almost strange for me to say that an album from Soundgarden has turned into one of the best releases I've heard all year, but in the end that's really all I could say about this.
In the end this wound up being not only one of the biggest surprises for me this year, but is also turning into one of my favorites. There just isn't a weak song on here in my opinion. I would definitely recommend this to anyone who likes rock or metal with good songwriting, or if you're into more experimental and heavy stuff, maybe this'll just act as a change of pace for you. A must for this year.
Overall Score: 9.5
Highlights: Every Track Is A Highlight
Posted by maskofgojira at 4:22 PM