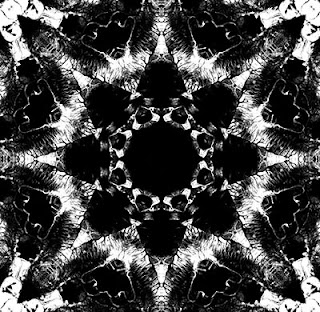 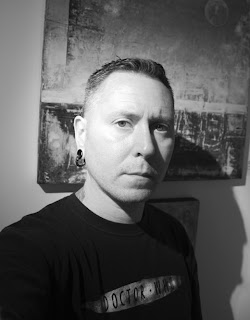 I've covered a few of Michael Page's previous recordings last year and enjoyed them both quite a bit. I have also gone back and listened to several of the project's earlier albums and gotten a feel for how Page works alone as well as when he's collaborating with others. This album has a whole slew of guests on it adding to the unique concept of the project.
From as far as I can tell, this is the most collaborative release that Page has ever released under the Sky Burial name, featuring the likes of Jarboe, Bridget Wishart, Xiphoid Dementia, and Danny Hyde to name a few. Hyde even went so far as to create two pieces (from the looks of the credits) on his own without collaborating with Page. The resulting album is far more expressive than I could call any of Page's previous releases, which is more than I could say for the album he made with Nik Turner, last year's Aegri Somnia. Though the majority of the album is still kept within the worlds of ambient and drone, the collaboration between various artists has resulted in a an album that channels many more stylistic ideas. Industrial and noise music, and to an extent I'd say krautrock as well, start to worm their ways into these huge spaces of ambiance and change the track into a more amorphous sound. Even the huge string section that opens up Shedding The Husk (and continues throughout the track) is slowly overtaken by spacey synths, atmospheric cymbals, and low-end drones, yet never feels like it's just one track fading out and another being turned up, which it very well could have turned into, but more of an engulfing of one and absorbing it into its own being. This is also one of the more interesting tracks on the album because it manages to change itself so many times throughout its ten minute length. From a churning orchestral intro into spacious ambiance and then again into slightly more frenetic, yet rather minimally composed, industrial piece.
The two pieces created solely by Danny Hyde do stand out on here in perhaps the most annoyingly obvious way. The first time I listened through this I wasn't looking at the booklet or anything and I hadn't looked through it yet, I was just listening to the music and both Carne[val] and Fools Circel 9wys stood out like sore thumbs. They were so electronic, and I want to say melodic, that they just sounded almost nothing like the other pieces on the album. For me, it might just be a placement issue, because the tracks themselves are actually quite interesting and are by no means bad, but they just didn't gel with the more ambient based tracks that make up the majority of the album. Having said that, there is just this overflowing sense of joy and enthusiasm that pours out of these tracks, and a majority of tracks from the album, where you can just tell how much these fun these people had working and creating these tracks. It's rare that I feel much emotion from ambient based music at all, I might feel something towards it, but the music almost never gives off a sense of emotion, and I found that rather charming and endearing about the album.
The end product of all these pieces being released under this banner is somewhat hit-and-miss, miss coming more from placement than any sort of lack of interesting ideas. There are some really brilliant moments on here that really convey an atmosphere that I rarely hear from any style of music. I think that if you dig anything from ambient to experimental forms of electronic music will be able to find something of interest in here.
Overall Score: 8.5
Highlights: Shedding The Husk, Silence Moves, Bone to Beak (The Vultures Speak)
Posted by maskofgojira at 12:18 PM