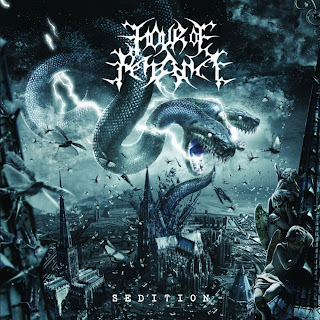 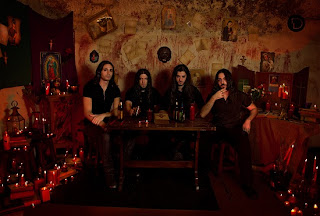 As I've said many times before, I'm not a huge fan of the brutal death metal sub-genre. There was a point something like three years back when I was looking into it for some reason and tried to find some good bands, in that search came Hour of Penance. This release comes after the line-up change which wound up replacing half the band's member.
Personally, I was big fan of the group's two previous albums. While I did find them originally in my search through the brutal sub-genre of death metal, the band showed significant growth with the entry of Francesco Paoli on vocals back in 2006. Both of the albums he did with them showed a great range for not only the vocals but also the instrumental delivery. It was still fast and brutal, but there were more riffs coming through and melody was starting to be significantly introduced into the picture on 2010's Paradogma. I was quite worried when I found out about his departure from the band later that year. He really had personality and style and I was unsure if the band was going to be able to find someone to match him. Enter Paolo Pieri who brings a similar style of growling to the band, but a much less clear style. Personally, what I really enjoyed about Paoli's vocals were that they were brutal and low but you could easily pick out what he was saying, I didn't get that from Pieri, unfortunately. His vocals definitely maintained the brutality and girth, but was much less clear - that may just be a problem with me having grown used to the band's sound with Paoli, but it was a problem for me.
Other than that the band did somehow shift back into straightforward brutality and decimation on this album. I expected a continuation of the more melodic ideas from their last full-length, but this album backtracks into the realms of endless blasts and low-end heaviness. This leads to my biggest problem with the album, and it's a problem that has applied to bands far less brutal than Hour of Penance as well, and that is lack of tempo variety. Pretty much every song on here starts off blasting, and continues onward doing so from there, and that not only lead me to feel rather bored while listening to it, but it also caused the album to feel rather one-dimensional. It wasn't until track five, Ascension, that the band slowed things down a bit and allowed melody to enter into the picture again where I felt like they had finally done something memorable on here. Granted, opener Transubstantiatio is just an intro track, the three following tracks felt more like a flurry of low-end and blasting that none of it stuck. There are a couple of other gems on the latter half of the album, but the band do return to the tried and true "destroy everything through blasting" mentality a little too often than I would have liked.
This isn't a bad album, but I do wish that the band had focused less on blasting the listener into submission and more on writing songs that stuck with them. It's not that I think the band need to necessarily slow down, I just think they need to find a balance between brutality and songwriting again. If you're a fan of really intense and brutal death metal, I don't see any reason not to check this out if you're not already a fan of the band.
Overall Score: 7
Highlights: Ascension, The Cannibal Gods, Deprave to Redeem
Posted by maskofgojira at 1:44 PM