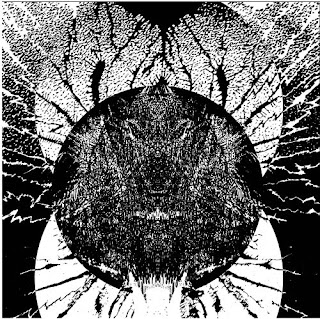 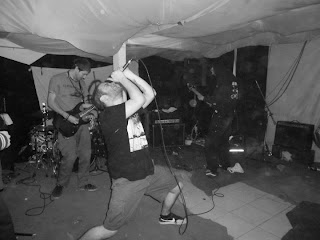 Originally, I wasn't sure if I was going to cover this, but after seeing how short it was I decided to give it a shot (yes, time does play a factor into what I cover). In addition to my more recent listenings being a bit more grind based than usual. Hell, I don't listen to enough black metal and grind mixtures.
Let it be known that if you like your music raw, noisy, and rather nonsensical, this is a band you will more than likely get a kick out of. This is the sort of stuff where I'm sure a bunch of random guys got together talked about how much they love old Darkthrone, Mayhem, Napalm Death, and Slayer records and decided to start a band to pay homage to them. This is almost exactly what I expect to hear when I hear about a fusion of black metal and grindcore, though this is definitely a lot more noisy than I imagined it being, but it still sounds pretty close to what I imagined in my head. Granted, a drone does close the last two minutes of The Absolute/Ol Sonuf Veoresagi (so you can correctly assume that this second track is this drone half of the song) so in that regard I guess I could say I was surprised by this. But since that is the closer, the five songs that come before it are all intensely raw tracks that switch between ADD-esque grind segments and thrashy black metal ones without much regard to making anything memorable, or even listenable at certain points. Maybe I'm not giving this as much credit but it just doesn't do a whole lot more than provide the bare minimum in terms of actual content, which would be fine if that bare minimum (in my book) included anything more than just nailing down a sound.
As a whole, it's alright, I guess I just wanted something a little bit more from it. It's the sort of thing that goes in one ear and out the other without much sticking in the in-between, but it's all fine and good. If you happen to enjoy really raw sounding grind or black metal, I do think you'll probably dig this in some capacity.
Overall Score: 6
Highlights: Feast, By The Will of The Deathless Gods
Posted by maskofgojira at 12:36 PM