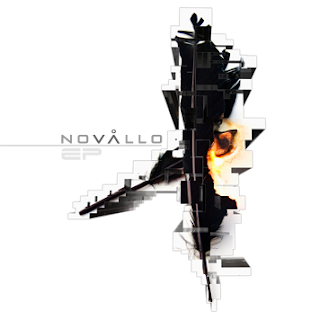 Obviously, as I've said in the past, djent is getting more and more over-saturated, and that remains true still. Every day, more and more bands are jumping on that train and trying to get some hype or exposure, even if they don't do anything interesting with it, but there are still some interesting groups popping up here and there. I happened to just stumble upon Novallo several days ago by coincidence, here's what I ended up getting as a result of pressing play.
If you hate djent, I have to strongly suggest that you do not listen to this release because those noise-gates are certainly on used to maximum effect on here. Those stop-start palm-mutes are quick and spastic and I could definitely see some people getting incredibly annoyed with this band because of it. Stylistically, they sort of remind me of Monuments in that they're rapidly bouncing between djenty grooves with quick melodic phrases with great efficiency, though there is definitely a much higher use of electronic effects on here. The reason why I wound up actually really enjoying this album was because of the vocals, they're definitely the stand out for me. Since four of the five guys in the band do vocals, I can't really tell you who's doing what (or if main vocalist Sam Gitiban is simply doing everything on here), but the vocal acrobatics are just great. There's a pretty wide range of styles being channeled on here, from standard death growls, Tides, post-hardcore singing and screaming, Visually Silent and 4 Eyes Win! respectively, or even straight-up soulful singing, Angle of Perception, and those are just the few that popped into my head while listening through a couple of times. I think that some of the choices sound a bit too digital, with some of the effects on the vocals not particularly working for me, but that's just a small gripe when I'm constantly being assaulted by different vocal styles from nearly every angle.
While I don't think each track is fantastic, I think there are some really great ideas on here that show a lot of potential. I do believe these guys could go far depending on where they decide to take their sound on future recordings. If you enjoy diverse songs that still come from the djent sound, I think you'll definitely dig this release.
Overall Score: 7
Highlights: Angle of Perception, Level Nine
Posted by maskofgojira at 2:15 PM