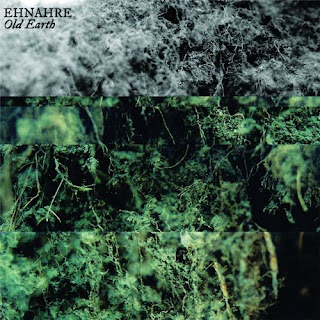 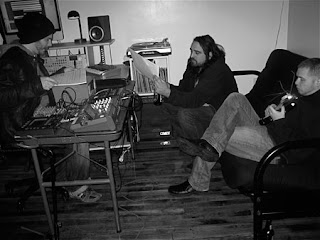 Since their 2008 debut The Man Closing Up was released the sometimes trio known as Ehnahre has been pushing and challenging the boundaries of death metal. Bringing in all sorts of jazz and classical inspired phrases and additional instrumentation has pushed the band into the realms of the unknown. I haven't been all that interested in the band before recently but I took a chance on this album just to hear what it was all about.
Based on the few songs I've listened to from Ehnahre's previous full-lengths, I can tell you that this one feels the least metal of them. I think it's important to establish that first because while this record certainly has roots and plenty of parts that are based in metal, it's the sort of record that throws any ideas of accessibility out the window and foregoes any sense of normality in favor of angular and dissonant song structures and riffs. Like their previous work, there is a heavy free-jazz vibe going on throughout the record, with a lot of ideas coming in not only from jazz and traditional composition formats, but also plays with ideas of sound collage, found sound, and no sound as well. The opening two to three minutes of the opening track is mainly the hiss from an amplifier with some other more avant-garde vocal exercises going on as well. It's not until about half way through the track that the entire band jump in and contribute to the weirdness. The track is insanely tense and manic. It felt like the entire band might just burst into a weird noise style "jam" at any moment and throw all caution to the wind and let the feedback and noise obliterate everything. But that never happened, god damn it! They just kept building more and more tension but it never exploded, and that was just in the first track.
I couldn't help but be a little frustrated the more the album went on. It kept restarting it's tension whenever a track ended and there was no blow up or release for the first two tracks. Now, I understand that there will be people out there who will totally dig that and think this album is genius, but I can almost guaranteeing that there will be just as many who hate this album because of it. The trumpets that emerge on Old Earth II just before the track explodes into it's third act, Old Earth III (though, the tension did reset if you actually listen to it) were well utilized and actually brought that cinematic quality to the otherwise rather unfocused structure of the track. It's important to notice that even though the third act of the album is the explosion I waited for in the first two tracks, it did not carry that tension over with it and instead went into full-on metal. Maybe it's the fact that the album is divided into four parts that's messing with my head because no matter how I try and reason through it, I know that I'm basically chasing my own tail right now, trying to convince you that each track resets it's brooding quality even though the four tracks are all connected to each other. It's weird, but there's just something about this that I can't quite grasp at the time I'm writing this. In any event, I think the cover art is great and fits perfectly with the album gradually moving from emptiness to full life.
I think it's an interesting album, at the very least, and a very frustrating one at the worst of times, but somehow it was still an experience. There's just something about it that I just can't really grab a hold of, something I'm missing. I don't know if I can recommend this for it being a really great metal album, but if you want to hear something really different and original, I'd definitely say to at least give this thing a try.
Overall Score: 8
Highlights: Old Earth II, Earth IV
Posted by maskofgojira at 8:23 PM