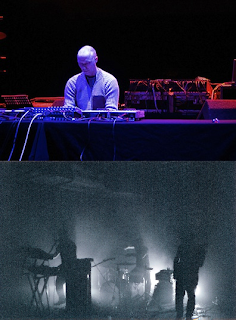 Obviously, I am a big fan of Chicago's Locrian and will support anything the band decide to do. Earlier this year, they released their amazing collaboration with Mamiffer and now we have another collaboration album. I was not familiar with German composer Christoph Heemann before hearing about this album a year or so ago, but whatever Locrian wind up putting out, it's always worth hearing.
It has to be said that on first listen through this album I was left scratching my head. What I know Locrian for being is experimental drone, which this is, I can't recall ever hearing any material from them that was in the vein of pure ambient music, which this is at times. I was thoroughly thrown for a loop on my first listen. Even the trio's work with Mamiffer was not as spacious as this turns out to be. Having said that, to say that it's a completely ambient effort would be selling this short, there is plenty of additional instrumentation coming in from the Chicago trio to balance out the more ambient soundscapes that Heemann constructs through these tracks. The best indication of this is on the opener, Hecatomb, which utilizes some really interesting drum patterns and synth work (piano and organ) to great effect while guitars are introduced only at the beginning before falling away into loops of ambiance. It's sort of an odd opener, it's not bad, but in comparison to what I'm used to hearing, even from straight-up drone and ambient artists, the first track is usually a bit more "grandiose", for lack of a better word. This track is more somber and meditative, it doesn't announce itself like a great majority of tracks do when you press play to the first song of an album, and I think that that is one of the reasons I was so confused after listening to this for the first time.
The rest of the album plays out in much the same way, with extended pieces of somber ambiance that can be just as unobtrusive as it is fascinating. The only trace of metal you will find on here are the wretched cries of Terence Hannum, and those will only be found on the second track, Loathe The Light. Like I said in the intro to this, I'm not at all familiar with Christoph Heemann's work outside of this album, but when I started writing this review I began to think of that old Friedrich Nietzsche quote, "When you look into an abyss, the abyss also looks into you," and I think that can be applied to Locrian. As anyone who listens to their material, we know it's dark and intense, even in its softer and more melancholic moments, but this could very well be what Locrian is on the other side of that abyss. Removing all the intensity and brutality that comes from their metal influences and replacing it with pure ambiance. Sure, I'm probably exaggerating a little bit, this thing doesn't really dive into pure ambiance until Edgeless City, which is a hell of a track. It's probably the quietest track on the entire album, as well as being the longest, and is just so spacious sounding, yet also somewhat twisted and morbid as well. Whether it's the low-end drone that pretty much acts as the foundation for everything else in the track or the surges of dissonance that arise now and then throughout, it's just a marvelous piece of ambient drone. Then there's the closer, The Drowned Forest. As if to only enforce the cohesiveness of the entire record, the track acts as an almost second part to the third track, following suit in its minimalistic form of constructing soundscapes of ambient noise and texture. With vocal chanting introducing the track, which may give it a bit more accessibility than the two tracks without vocals, I'm not sure if the person who'd buy without a second thought is the type of person who'd even care if there were vocals on here at all, but it gives way to that darker, amorphous atmosphere that was heard on track three.
It's quite the interesting record that is probably even more divisive than either group/artist's usual output. With how unusual this record came out to be I can't help but ask myself questions about it long after the four tracks have ended and I'm left in silence. If you're a fan of ambient, drone, dark ambient, experimental music in general really, I highly recommend you check out this album now.
Overall Score: 9
Highlights: Hecatomb, Edgeless City
Posted by maskofgojira at 7:53 PM