Njiqahdda/Njiijn - Arrivals of The Golden Temple (2012) 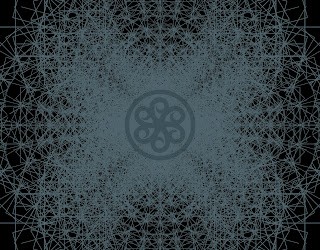 First up we have this digital only release done by the two halves of Nji name. With two tracks each, I'll start with Njiqahdda's side first. The two tracks contributed here are a bit less in their usual black metal style, instead being somewhere between progressive sludge and the more technical metal they've been developing on their more recent material. There's some traces of post-rock that poke up on Aran Insiniti as well which did make my ears perk up. It was actually a little disarming at first because it isn't what I expected to hear. Nonetheless, both tracks are still pretty engaging and are more of an accessible take on what they've recently been doing. It's not overly technical or progressive, so it's easier to swallow, but it's still varied enough to keep all us old fans interested. Then there's Njiijn, who's two tracks (though track two is a re-interpreted version of the first track) top a hour in length. Arrivals of The Golden Temple is an extended piece that combines elements of noise, drone, dark ambient, sound collage, and acoustic music. I've said before that I've never been the biggest fan of Njiijn, I certainly enjoy their music and I am always impressed with the duo's constant need for experimentation with the project, but it's never really been my cup of tea. Both these pieces accomplish what they need to, but I can't say that they did anything to reinforce my feelings for the project already. The reworked version is a bit less exaggerated and is more in the drone and tribal percussion vein that the project has explored on an album like Roots to The Sky....
Overall Score: 6.5
Highlights: Daasmalik, Aran Insiniti 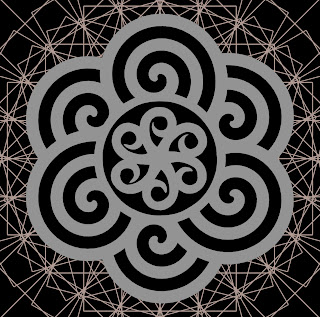 When it comes to split releases, this one definitely takes the cake. With somewhere around two hours worth of material, each band really has their own opportunity to shine, so if you decide to check this out, know that you will be in for a long and winding ride. First up is Njiqahdda. Including the release above, the last couple of releases from the band have not really lived up to the promise and greatness they delivered on last year's stellar The Path of Liberation From Birth and Death, and I understand that writing technical and progressive songs like that is no easy task, but the last couple of EPs have been a bit lackluster (for me). The three songs from the band on here definitely take the ideas from that album and focus them into intricate pieces of technical metal. More recent material has shown the band moving away from the black metal roots and approaching something like a very progressive and/or technical form of sludge metal. All three tracks are great and really deliver on the promise of that aforementioned album. Then there's the Njiijn track, which is very drone based, and quite ambient as well. It's an interesting piece because it feels so minimal, very empty in more than a couple spots, even though there's always some sort of idea happening. I didn't find the track to be as dull as I've found some of the project's other material, but I wouldn't say that it's the sort of track that is best analyzed. It's best to kind of just let it wash over you. I wasn't overly keen on the last EP from Oaks of Bethel, Orange Triad, because it just felt a little redundant of what the duo had already done, this new track is a bit of a different story. Sure, it isn't all that dissimilar to their previous material but it's definitely more engaging. As per usual, the duo blend drone doom and black metal together, though this is a bit of a return to the washy production style of their older recordings. It's nice and varied, with plenty of droning segments broken up with some more dissonant black metal ones, definitely a keeper. While this is certainly relative, one could even call their track "progressive" as it contains some of the most interesting riffs I can recall the project ever containing. Finally, there's Funeral Eclipse. Of the four groups, this one is the most straightforward in style for the duo, though that's all relative to what you're comparing it to, the songs are still quite impressively diverse. Despite how things start off, the majority of all three tracks are actually quite mid-tempo or slow, which was quite interesting to hear. For a project who's past work has been quite direct, these songs weren't as immediate or accessible, so to speak. As a whole the entire split is certainly a lot to take in, but is certainly worth it. Contained within is some of the best material yet from each project and you would be sorely missing out if you passed this up.
Overall Score: 7.5
Highlights: Pass Into Oblivion, Crest Upon Wing, Into Waves of Radiant Golden Light, The Aeon Is Here At The Center 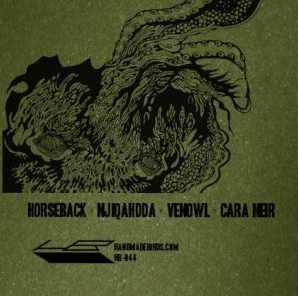 Finally we've come to this, what has been one of my most anticipated splits for this year. With four really interesting and unique groups all bringing new material to the table especially for this release. What's really cool about these tracks is that all of them are noticeably more rawer than most of the other material in the back catalogs of these groups (though that may just be my perception of this since it's on a cassette). Heathen Earth from Horseback definitely sounds like a B-side from the Half Blood sessions, and I don't mean that in a bad way. It has that sort of hypnotic pacing and groove while building more and more layers of sound with every passing minute. In my mind, it's more aggressive, though it's certainly still hard to even call this metal, than some of Jenks' more recent material. It still relies heavily on cyclical grooves and passages, but at times I certainly did feel a bit overwhelmed by all the sounds I was hearing (once again, not a bad thing in my book). The duo of Njiqahdda bring Towers Constructed to Break The Sky to the table in which, to me, it sounds like they tried to channel a little bit of everything they've done into a single track. The entire track blends psychedelia, technical metal, sludge, and even a little bit of the band's more folky side, more in some of the melodies than any specific part, and it's the sort of track that reaffirms why I love the band. Then, opening up the side-B of the cassette, is Venowl, who bring together one of their shortest pieces, compared to their more recent material, with III. For me, this was the track that definitely held the most tension and was certainly unnerving. Throughout its six and a half minute length, it felt like it was going to explode at any moment, and just when it would seem the band was going to, they would slow it down again (what teases they are). Closing the split out is Cara Neir, giving a whopping three tracks. Once again, Gary and Chris (with Dorian for these three tracks as well) manage to change themselves up just enough to make these three tracks stand apart from their other material. These three songs are certainly more in the black metal realm than their recently released Sublimation Therapy EP was, but fits in with the rest of the bands on here by making this material just a bit more diverse in terms of structure and style. In addition to that, I actually have to say that of all four bands on here, Cara Neir probably surprised me the most with Seize and Exist, which I think steals the show on here for best track. I don't think I need to tell you that this split is just amazing and is more than worth whatever you pay for it. One of the best releases this year, not just in splits, but releases in general. Buy this thing!
Overall Score: 8
Highlights: Heathen Earth, Seize and Exist
Posted by maskofgojira at 11:28 AM