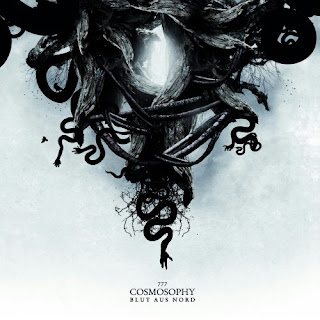 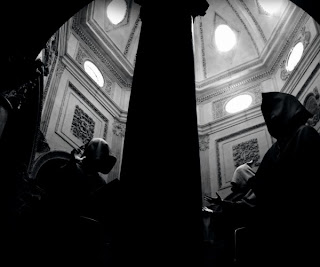 As if it really needs to be said at this point, but Blut Aus Nord are easily one of the most unique bands to emerge from the black metal scene. With each release they push themselves further out of their metal "comfort zone" while retaining their core roots. After the two 777 albums from last year we have the closing of the trilogy with this album.
Anyone who's been paying attention to the last two sequences in this trilogy will be able to tell you that the 777 - The Desanctification definitely removed a lot of that metallic edge that has been present on the majority of Blut Aus Nord's material and is possibly the furthest the band had stretched their sound to that point. Having said that, I felt that that album was a bit weaker than its predecessor in the trilogy, still very good and well done, but weaker none the less. Put into the context of being the middle segment, it does feel a bit more cohesive than when it's on its own. Listening straight through from part one to this album (part three), it's place becomes more understandable. It linked the more metallic and dissonant intensity of 777 - Sect(s) with the more brooding and atmospheric industrial tendencies of this album, bridging the divide. With that being said, this album did surprise in regards to how experimental it actually is.
After listening to all three albums in a row, I didn't really feel like this album was as strange or far reaching as part two of the saga was. While it's certainly far from the dissonant black metal that the band has worked with before, it feels darker and more powerful, confident in a sense. It's a much more grandiose sounding album. To say that the album is without new avenues of exploration from the band though would be doing this album a great disservice. I've read a couple of comments where people have said that the album is great except for Epitome XV (the second track), which features a much more hip-hop influenced sound to it. Personally, I didn't have a huge problem with it as it not only fit in context with the rest of the album, but I had read an interview with Vindsval last year where he had said that he planned on experimenting with some of the ideas from hip-hop. I couldn't say I was surprised by it, or perhaps as surprised, because it still sounded like the band to me. Vindsval had said in the same interview that he had wanted to, at least, attempt to remove metal from the band's sound on a forthcoming album as well. Now, I don't know if he meant it for this album or on in the future, but this album didn't feel devoid of metal to me, and I'm glad that it doesn't feel too far removed from that sound.
This album is far less abstract sounding than some of the band's previous outputs, including albums outside of this trilogy. It's still very interesting and dense, but it isn't quite as numbing an experience as MoRT was, or as psychedelic as 777 - The Desanctification, though I think that may be the point. If the first two albums were meant to drop the listener down into the pits of human destruction, absolute chaos and despondency, and spiritual absence, than this is the blinding light of absolution. The first two tracks on here are dark and are closer to the last full-length, but the last three expand into a sort of bleak and hopeless darkness that is somewhat revelatory in its structure. I hate to mention post-rock in a review for this album, but the structures of those last three tracks really made me think of those grand climaxes that come from groups like Godspeed You! Black Emperor or Sigur Rós. It's dark and light all at once, a true revelation of sonic architecture. I also happen to think that Epitome XVII is one of the best songs the band has ever written.
I think this is a magnificent piece of work and has become one of my favorite releases from the band in the short time I've spent with it thus far. I don't know if I can really recommend it to metal fans, but I think it's an album that, regardless of what style you enjoy, is worth hearing this year. Definitely one of the best of the year in my opinion, do not miss this one.
Overall Score: 9.5
Highlights: Every Track Is A Highlight
Posted by maskofgojira at 11:21 AM