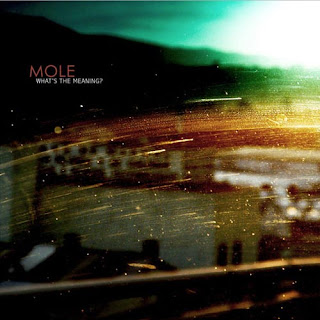 I don't think that there's a single person in the world who hasn't heard jazz at some point. Whether it happens to be a random band in a bar, the music playing as you walk through a mall, or to an extent, even street musicians in some foreign countries harness some of the genre in their brand of skiffle music. Without a doubt some of the most commonly known ideas about the sound of jazz comes from what is found on this debut record.
The product of a rather worldly quartet formed by Mexican pianist Mark Aanderud and up-right bassist Jorge "Luri" Molina, New York guitarist David Gilmore, and Argentinian drummer Hernan Hecht, what you have on here are extended pieces that blend various ideas into something that is, at least in my opinion, more palatable. I've said before that my knowledge into the world of jazz is rather limited, but even I can hear ideas from the worlds of lounge, funk, fusion, and to an extent prog-rock, in these compositions. I realize that this next comment will more than likely be taken the wrong way, but the sound of this record, not so much the performances, but the overall sound, made me think that this is the sort of thing that could be played in the background of a mall or restaurant. It has that very airy, but very clean and polished, sound that I tend to think of when I think of that sort of background music. Elevator music in some terms. I mean, this thing very rarely rocks out, it keeps things very much in the jazz tradition, and even when it rocks out, it balances those moments out with more of the lounge or contemporary stuff, hear Flour Tortilla Variation for an example. The few funk inflected tracks near the end of the album are more grabbing as well, as they did tend to stay with me for a while longer than some of the more "straight" jazz tracks.
In my opinion, the clear standout performance on here is Aanderud, who always keeps things moving, while not ever coming off as pretentious or audacious. He keeps things grounded with a track containing a melody while letting it move into free-form improvisation, letting it fly off the handle, and then bring it back in. I mean, I guess credit could be applied to all four members for that, but Aanderud just brought this air of tastefulness and focus to the project, which obviously stems from him being one of the founding members, that never let the songs fly off into random noodling. I do have to compliment Hecht for really keeping things restrained, for as much as I praise Aanderud for keeping these songs on course, Hecht is really the one to which that should be directed towards. His playing isn't overly flashy or technical, but restrained and controlled, though he does flex his muscles a bit more on PB or the title-track, where he does break out into some more "active" playing. Not to discredit either Gilmore or Molina, their performances are both very well done and certainly add to the album, but I found myself gravitating to the performances of Aanderud and Hecht far more often.
It's an impressive debut, but not one that's totally devoid of cliché, which, from what I've read, is part of the reason for the appeal of this. This isn't the sort of stuff I typically listen to, but it's nice for a change of pace. If you happen to enjoy modern jazz I think this is definitely worth checking out if you already haven't.
Overall Score: 8
Highlights: Trees and The Old New Ones, Flour Tortilla Variation, Greenland
Posted by maskofgojira at 9:07 PM