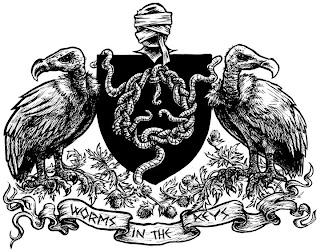 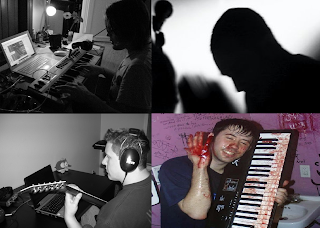 Anyone who's read several posts reviews from this blog knows that if a band has the words avant-garde or progressive in their genre description, I will more than likely like it. I remember hearing word of this project a year, or maybe a little bit longer ago, through an interview with Dr. Mikannibal of Sigh. Now we have this, a new album that is just sort of out of the blue with a pretty interesting line-up.
Back when I first read that interview with Dr. Mikannibal, the only other member I knew would be in the band would be Agalloch's Don Anderson. Looking at the line-up of people who are apparently a part of this collective, we have Jason Walton who's also in Agalloch and Mirai Kawashima from Sigh, as well as members from the likes of Formloff, Future Disorder, Fleurety, and Winds (among others). That's an all star group of people if I ever saw one and it's a group of musicians who know how to make some really interesting music. If you're coming into this expecting this to be somewhat Agalloch-ish, think again because this is much closer to Anderson and Walton's other band, Sculptured (who I wish would record a new album). It's much more in the avant-garde strain of metal where ideas from jazz, electronic, polka, noise, and other genres all bleed into one another in some bizarre concoction. It's a volatile mix that not everyone will enjoy, I could see some people who come into expecting that Agalloch sound being totally angry at this record, but this is the sort of stuff I love hearing and it's a part of one of my favorite strains of metal music.
Despite how weird this record is, as in saxophone solos over bongos and electronic beats with screamed vocals weird, it's all made into coherent and catchy song structures that are easy to remember. It's the sort of album that you could just as easily dance to, though I may be overextending just a little bit there, as you could scream along to some of the ridiculous lines being said. Ridiculous in the sense that pretty much anything you would say would sound a little funny over this sort of stuff. I mean some of this stuff is almost comical in how it works together, and that's probably one of the reasons why I love it so much, but it's the sort of stuff that is seriously catchy if you allow yourself to just go with the absurdity. If you fight it, you're not going to enjoy this at all and will probably be one of those people who hates it for throwing as many ideas at the wall as it does. So remember, don't hate, appreciate. I think the idea of putting the sound of, what sounds like, a metronome over what is essentially a chip-tune-esque breakdown is genius. Perhaps it doesn't sound all that great written out, but seeing as that section is like three seconds long, it works amazingly. I think putting a folky acoustic guitar part of a pulsating drum beat (that could just as easily have been put into any number of dance songs and got kids dancing along) with an organ droning in the background is great as well. If you can do anything you want and you have a group of talented friends and colleagues who are ready to help out, why not go for it? Throw everything you can into a song, and the kitchen sink and microwave and see if you can write songs with it. With all that being said, there are a couple of songs on here that did seem to go nowhere - I'm looking at you SKITE - and I think that if the various members decided to start writing songs they could have avoided an incident like that happening. Maybe in the future they'll release a record that is stellar, but unfortunately, it's not a record full of winners.
As I believe I've said before (because now I can quote myself), "Give me weirdness, or give me death," give me Self Spiller because they are awesome. It's not going to be album of the year for me (sorry to disappoint some of you) but that shouldn't deter you from checking out this great album. Listen with caution, listen with interest, and you shall be rewarded with great treasures indeed.
Overall Score: 8
Highlights: Folds of Skin to Lay, Therefore I Worship, I Spit In The Stomachs of Zombies
Posted by maskofgojira at 6:39 PM