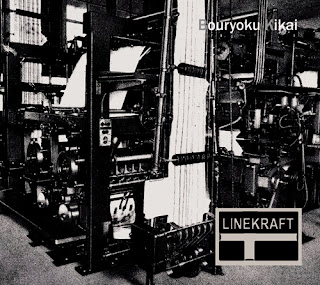 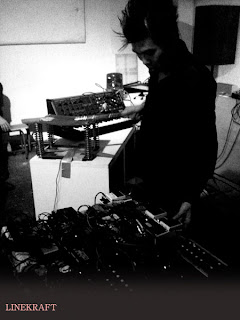 Japanoise is really something that has become something of a rite of passage for me (maybe it is for others as well). My first introduction into the whole noise genre was through the likes of Merzbow, Masonna, and C.C.C.C. back in something like 2008 or 2009 and since then my occasional exploration of the genre has obviously broadened outside of Japan. I had never heard of LINEKRAFT before now, but seeing as I have never covered any Japanoise projects, I thought now would be a good time (even if it's not Merzbow).
I found this album somewhat hard to penetrate due to the mechanical nature with which most of the sounds are derived from. Industrial and abrasive is one way of putting it, disturbing and torturous is another, depending on your perspective. There are points where this is pure and unrelenting noise assaults, nothing but walls of sonic destruction if you will, but then there are more calm moments where it's somewhat ambient and chilling. Those moments carry with them a sense of unease, more than likely with the industrial clanging and bashing that happens to be all over the record. I honestly can't say that a whole lot of this was as mind-bending as any of the artists I mentioned above, but it did feature this sort of menace that I haven't heard from noise music in a while, most of the artists above have long since past their point of being outwardly destructive and violent. When it's aggressive, it's really in your face, though certainly not without texture and atmosphere. God, do those industrial bits add something eerie when they're used properly.
As one might expect, the epic Jinkaku Shougai/人格障害 is the standout on the record. In it's nineteen minutes, it pretty much shows you a little bit of everything that you'll hear in the smaller and condensed pieces, though at a slower and less spastic pace. There's a little bit of that subtle, dark ambient soundscape sort of stuff, there's the industrial beats, walls of feedback and drones, pretty much what every noise fan would want, except for the intensity. For all the variety and progression that is made in this epic track, the brutality, the emotional violence, all that rage and anger, or sadness, is lost. Sure, there's more than your fare share of aggressive bursts, but if you think that's maintained for the entire nineteen minutes, you're dead wrong. I think doing that, something in the vein of a project like Vomir, might have been interesting, but the shorter tracks, while certainly more intense are way too messy, in a good sense, to maintain that wall of intensity for that long. Frankly, I still think it's a pretty interesting piece, but I know that some might disagree that the loss of brutality and constant aggression might not be worth the extra length and experimentation, or progression.
As a whole, it's decent, not great, but not bad either. In terms of the noise genre I do think that it's certainly interesting enough to warrant at least checking it out. Whether or not you wind up digging this I guess depends on how much noise you've listened to as of late, but it's worth a listen.
Overall Score: 6.5
Highlights: Jinkaku Shougai/人格障害, Kenjyu Jisatsu/拳銃自殺
Posted by maskofgojira at 1:33 PM