These reviews have been a long time coming. I've been awaiting Terence Hannum's EP for several months (I think it was mainly because of the cassette pressing plant more than the label), but I finally got it a couple of weeks back. Here are the results. First one is reviewed from 1-8, the second album is reviewed from 1-10. 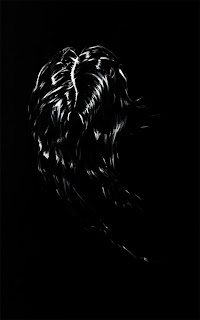 As many reading this will know, Terence Hannum is a member of experimental drone trio Locrian. From what I understand, his solo works are either meant to be scores for soundtracks (either for friends or otherwise) and as far as I know, this one is no different. This is one of (I think) three releases he's put out this year under his own name, but this is the only one I've heard.
For those familiar with Locrian, I'm sure some of the ideas that are present on this tape won't come as a huge surprise, but if this is your first encounter with Hannum's work, you might be a little put-off by it. Sure, I'd definitely say I'm a bigger fan of Locrian than Hannum's solo material, but the more ambient drones he creates are certainly an interesting experience on their own. This is not a big, boisterous record and remains very dark and mellow for the better part of it's twenty-two minute running time. It's a much vaguer sounding recording than his La Répétition tape was (if that means anything to those who have heard it) and struck more of a chord with me in it's last nine or ten minutes because of the, slightly, harsher noises that begin to appear during that time. Things only get better from that point onward as the track begins to build up more and more tension before finally releasing it all at the end. Though I do have to say that the vocal warbling that is introduced at the ending is slightly annoying.
In the end it's a solid enough release, though nothing mind blowing. There are things about it that I like and things that I don't like about it, but it's worth hearing regardless of that. If you're a fan of drone, ambient, or experimental noise music, definitely take a shot on this, maybe you'll dig it.
Overall Score: 6
Highlights: The Crown of Immortality 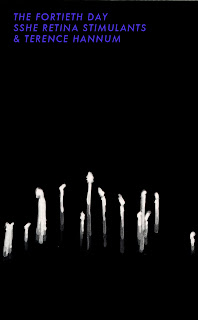 Time for a tape that was released earlier this year. I probably would have put this review out earlier if I wasn't so set on covering it in a review with the above tape, but what can you do. I was unfamiliar with both The Fortieth Day and SSHE Retina Stimulants so I couldn't tell you how much they impacted the overall sound of this recording. It's somewhat surprising to me how well noise based music sounds in a live setting. You could get a hundred different metal groups together and have them play one after another, and very few (obviously depending on which ones were actually selected) would manage to pull off a sound that is as powerful sounding as their albums. This collaboration really has that visceral quality to it that only improvised music can have. The majority of the material here has that very low and restrained quality that eventually bursts out into blasts metallic noise. I have to say that while I was listening, I did enjoy what I was hearing, but it never really struck me as being engaging or grabbing. The only real complaint I have towards these recordings is on the fifth track where there's this sort of pinging sound that's used repeatedly through that reminded me of the sound that my Iphone makes whenever I get a text or a message. I know that these recordings were all modified by P.NG5361.B and while I do respect that, I do sort of wish I could hear the original, unmodified recordings just to get some sort of other perspective or idea of these recordings.
Honestly, seeing as it's improvised, I can't say any of it was terrible, but it doesn't really have that quality that made me want to relisten to this over and over again. There are some aspects in here that I did enjoy, but there just wasn't enough substance to keep me engaged. If you happen to enjoy noise and drone based music, I'd say to at least give it a shot.
Overall Score: 7
Highlights: II, VI
Posted by maskofgojira at 11:37 PM