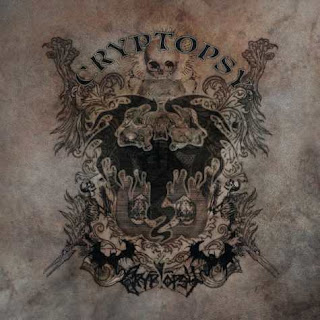 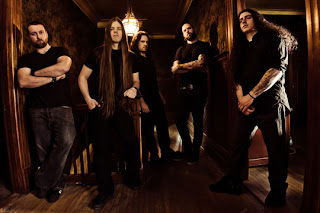 Cryptopsy have returned. After the disastrous backlash from 2008's The Unspoken King album, the band pretty much withdrew from the public eye slower with each year before announcing this album was in the works. So far, it seems as though they've regained the respect they had lost from four years ago from many critics and fans.
Now, I can't say that there's been unanimous praise for this album, but from what I've read, you'd be pretty hard pressed to find someone who didn't at least think this was better than The Unspoken King. Frankly, while that album may not have been my favorite album from the band, I didn't think it was as bad as everyone else seemed to. I thought there were a few songs on there that were actually pretty solid and a few of them made use of Matt McGachy's clean vocals, which a lot of people apparently had quite a big problem with. But whatever, onto this new self-titled album. I read in Decibel, I think, that when guitarist Jon Levasseur came back into the band he made them promise that the band would make use of no clean vocals or experiment with any trends, and apparently the rest of the band were fine with that cause this is certainly not a deathcore album in any way. This is pure, unadulterated technical death metal.
When I first heard the two released songs from the album, opener Two-Pound Torch and Red-Skinned Scapegoat, I wasn't overly keen on them. They weren't bad or anything, but I didn't think they warranted the reaction they were recieving. Yet, for one reason or another, after listening to this album, I found that they had grown on me, especially the opener, which I though was a really good song. That song just brought back everything I liked about the band when I first started listening to them, catchy riffs, relentless drumming, and always entertaining bass-lines, along with McGachy's new found guttural brutality. It set the bar high for the rest of the album and luckily the rest does not disappoint. The album continues to pummel you into the dirt with some of the most frantic and brutal death metal I can remember hearing in a long while. Having said that, the band still find time to indulge their jazzier side on occasion with a couple of very short interludes found in tracks like the aforementioned Red-Skinned Scapegoat or Damned Draft Dodgers, not that you have to worry about those sections being extended, since they barely last ten seconds each. To a certain extent I almost wish those short interludes were just a little bit longer just so it wouldn't feel quite so frivolous to me, but I guess that's a minor complaint since the songs are written so well and as tightly constructed as they are. There is rarely a pause in these songs, and I am including those jazzy sections in here as well, it constantly and consistently drives you into the ground. While I hope the band continue this rabid intensity on future recordings, personally, I think I'd also like to hear them experiment in some capacity as well.
Sure, it's not exactly new territory for the band but it's some of their most gut-retching, bowl churning material in years. While it doesn't top either of my favorite releases (the top spot for me actually belongs to 2000's ...And Then You'll Beg album), it's certainly better than either of the band's last two albums in my opinion. If you like death metal, in general, this is a must for this year if you haven't already heard it.
Overall Score: 8.5
Highlights: Two-Pound Torch, Amputated Enigma, Cleansing The Hosts
Posted by maskofgojira at 1:44 PM