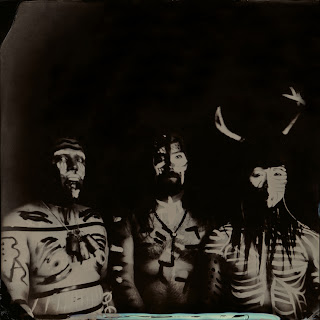 This is the sort of album that comes along every once in a while that I have a tough time finding something to pair with it. Luckily, I actually had something waiting in the wings, so I was able to write this review up a lot earlier than I had originally planned. Featuring members from the likes of doom metal titans Dead to A Dying World, this group certainly did intrigue me.
I have to say that when I first played this record, I was very surprised by the degree to which these musicians performed. It's not so much that I expected the performances to be just average or passable, but the music comes across as a much more intense form of fusion that explores a lot of ground in each track. Sure, there's no denying that this is a jazz-rock record coming from guys who play various forms of metal, opener Gemini Croquet features a doomy introduction and an ending riff that wouldn't be out of place on a grindcore track. It's those certain parts that stick out and keep me interested in what's going on and make the project stick out from the dozens of other jazz-rock groups out there. It was the use of the vibraphone that perhaps brought the greatest surprises for me. Not only is it used all over the album, but when it's being integrated into the fabric of the work being done on the drum kit, it feels so powerful and captivating. I also thought that the band did a pretty consist job at building tension while playing, which led to several nail-biting sections that just felt like the band was going to fall off the edge and just explode into avant-garde absurdity, but that never happened (listen to it yourself to decide if that was a good or bad thing).
However, having said all of that, this record is improvisational, and on a record like this, that can often be more of a hindrance than a strength. I have no problem with improvised music, sometimes it can be very refreshing and invigorating, but more often than not, it takes just as much restraint to reign yourself in and that's something that a lot of groups just don't have a handle on. I understand it's supposed to be chaotic and off-the-hook, but it doesn't have to be uncontrolled. A track like the fifteen minute Funeralis Pachydermis is all well and good but goes on for too long to maintain interest for the entirety of its duration. It addition to that, referencing the very same track incidentally, there were several guitar runs that just made me think of the theme song to that old cartoon The Ren & Stimpy Show. That doesn't have to be a bad thing, but hearing it used repeatedly can get a little annoying. Personally, I found that when the band introduced a more rock or metal based part into the fabric of their improvisations, the result was more grabbing and made for a better listen. Some of the straight-up jazz pieces I found to be just a little on the dull side for my own tastes at certain points.
It's not a bad album, but it can grow rather tiring quickly, at least for myself. I've always said that I am no expert on jazz and recommend what I like and even though this isn't strictly speaking a jazz record, I think it can still be viewed as such in the right light. If you enjoy improvisational music or various forms of jazz rock, I think it's definitely worth looking into, but otherwise, proceed with caution.
Overall Score: 7
Highlights: Tranquiladora Alborotadora, Molesting Electric Walter, Peneteka
Posted by maskofgojira at 2:12 PM