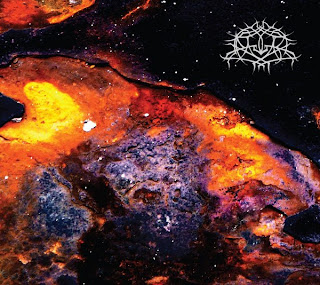 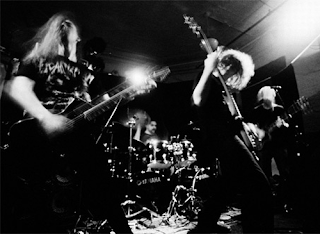 In the modern black metal world, you'd be hard pressed to find a band that's as widely accepted by both critics and fans both within and outside of the black metal genre as New York City's own Krallice. Bursting forth from the scene in 2007, and shocking everyone with their 2008 debut, they've continued to push forward with each release. Seeing how prolific the band is, since Profound Lore (which has been the band's home for their past three full-lengths) couldn't find time in their release schedule for this album, the band just decided to put it out on their own.
Speaking for myself, I have found that Krallice have evolved in their own special way from album to album, and it's not the typical form of evolution where it's immediately noticeable when you hear it. Each album is sort of a subtle shift, whether it happens to be an increase in technicality, a shift into more melodic territory, the use of more dynamics in a song, or the incorporation of other genres, each album has showed fans how interesting a band can be when you don't make those things obvious on immediate listens. Each Krallice album is one that you won't get everything out of from a single listen, they're the sort of band who release albums that are pretty dense and hard to pull apart, and I'm sure that if you played two Krallice songs from different records for a random person, they wouldn't be able to tell you the difference between the two. It's only after you sit with the album and think about it, explore it, that you come to see the differences between their work, or at least that's how I've always seen it.
Those high-speed tremolo riffs that the band use in nearly every song of their is something I really admire, and it's something I've definitely tried to rip-off in my own way in my own music, but it's something I've heard from some other groups as well, but I digress. Credit really has to be given to these guys for making nearly all their songs feature their now signature sound while never once making their songs sound the same and for making them all interesting to listen to. Seeing as all of their albums have had songs which have topped ten minutes, four of the six tracks on here top that mark, it's amazing to me how they manage to still keep interest and energy so high for that amount of time. With that being said, I know some people were not all that into last year's Diotima album, or at least not as into it as the previous two full-lengths, but that album did have the band focusing more on playing together in a more harmonious way, with guitar parts that weren't constantly running miles around each other into oblivion. If that was the only thing the band got out of doing that record, I'm glad, because this album features some of their best songs yet. Incidentally, I happen really like Diotima.
Where I feel that this album differs from the band's previous work is in the songwriting. While the opener, IIIIIII (1), is a pretty standard sort of track for the band, it's fast and brain-melting, the tracks that follow it begin to dive further into different genres, even if they're used very minimally. The track that stuck out the most to me was IIIIIIIIII (4), which I think has become one of my favorite tracks from the band at this point. It has all the band's usual tricks and ideas, but has an almost post-rock-esque opening that really surprised me before jumping in with an almost thrashy death metal sounding riff, which is used throughout the song. I've never heard the band put out another song quite like it and I think it's a resounding success. I should say that the death metal influence can be heard on several songs on this album. In addition to that there's also a lot more syncopation between the instruments on here, namely on closer IIIIIIIIIIII (6), where you get, and I know I'm going to get hate for this but, Liturgy-esque guitar and drum syncopation, and it's just great. I just love stuff like that, and I think that these guys do perform that syncopation style in a way that is less obnoxious than Liturgy.
I don't know if this album tops 2009's great Dimensional Bleedthrough for me, but it's certainly another notch to add to the band's wall of achievements thus far. I think that if you like black metal or even progressive forms of music (less general there) you'll find something on here that will grab you. Krallice is a great band, definitely support them so they can keep blowing fans away with records like this one.
Overall Score: 9
Highlights: IIIIIIIIII (4), IIIIIIIIIIII (6)
Posted by maskofgojira at 1:11 PM