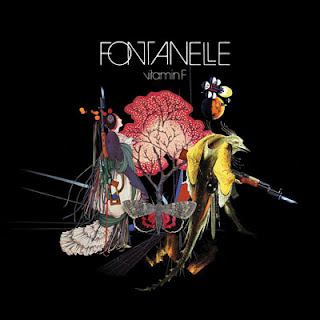 Previous to being sent this album, I was not aware of Fontanelle. After a little bit of reading and finding out about Rex Ritter's tenure with the likes of Sunn 0))) my interest was piqued enough to make me want to check this out. It's kind of nice to start with the band at this point as it's sort of a new beginning after being on a hiatus for the last ten years or so.
Not really knowing what to expect from this album when I pressed the play button, I have to say that I was surprised by what I wound up hearing. I guess in my head I was expecting some sort of weird concoction of jazz fusion and drone metal, but what I got was straight-up jazz fusion. Psychedelic fusion at that. It's a definite throwback to the late 60s and early 70s sound with some very natural and spaced out modern production to give it that extra shine and make it all clean sounding. In a certain sense, the production choices do recall a lot of the jazz that I've been hearing recently, though the music is far less accessible. So even though the production does bring it a sense of bigness and space that certainly has a familiar sound to the background music in a lot of shopping centers, the music is much more adventurous and psychedelic than anything I'd imagine a mass audience would ever desire to hear.
Being a fan of 60s and 70s jazz fusion, psychedelic rock, and to an extent, funk, I just thought this album was a blast to listen to. Each track just pumped out a great groove that kept my head bobbing or my foot tapping while a lead instrument would then take over the lead and just do whatever. I don't mean that in a flippant way, but your could have everything from the horn section synchronizing with the groove to a guitar solo. Along with that is the band's skill in writing tracks that carry a pretty solid range of moods and tempos. The band pull off both the pensive krautrock-ish groove of The Adjacent Possible while still bringing the good time pop of Traumaturge with aplomb. I don't know if others will agree with the following statement, but at least for me, there were a couple of tracks on here that I thought would sound great if you played them alongside a psychedelic movie. Turn off the sound of a movie like Jim Jarmusch's Dead Man or Serge Bromberg's documentary L'Enfer d'Henri-Georges Clouzot and just trip out. It's not the sort of thing for everyone but I thought it was cool when I tried it, but the music is still great even if you just play it in the background while doing the dishes or driving your car.
Seeing how I came into this expecting nothing, I was pleasantly surprised by how much I wound up really enjoying this album. I've heard a couple psychedelic albums this year but this one is far and away one of the most enjoyable and memorable. I think if you dig psychedelic music, fusion, or even straight-up jazz, this is an album that you shouldn't pass up.
Overall Score: 8.5
Highlights: The Adjacent Possible, Traumaturge, Ataxia
Posted by maskofgojira at 9:39 PM