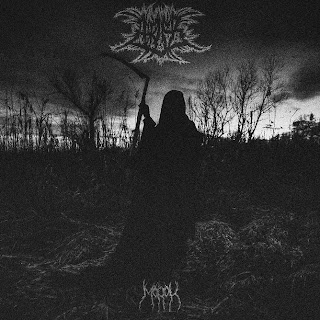 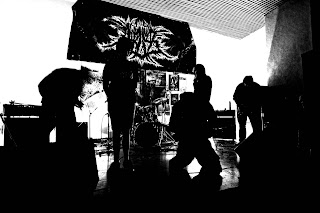 As I've said in the past, I have a rather strained relationship with metal from Eastern Europe, so I came into this record kind of nervous. Very rarely have I heard a mixture of black metal and brutal death metal so this did interest me. There's been some pretty decent press for this album and by now, I think I've gotten a good feel for it.
While the fusion of brutal death metal and black metal isn't one that has been done all that often, sure there are blackened death metal bands, but from what I've heard and listened to, the only band who really fused the more brutal, guttural and punishing side of death metal with the atmosphere, tremolo riffs, and diversity of black metal was a rather interesting group by the name of Demoniacal Genuflection. I have so say that in comparing the two bands, I do think Agruss are far more successful at their fusion of the two genres. Agruss manages to keep their black metal side pretty varied, with ideas seeming to come from everything from Enslaved to Deathspell Omega to Mayhem, while their death metal inflections were compared to, in the press notes for the album, to a group like Defeated Sanity, but reminded me a little bit more of Cephalic Carnage, but less weird. The fusion doesn't always work, I think that opener Damnation is a bit messy in its transitions from the chug-heavy brutal sections and the more interesting black metal ones, but the ideas are certainly there. I also think that the vocals do have a tendency to kind of overwhelm the instrumentation. For the most part the vocals are pretty solid and consistent, but when they try and make a screaming part occur at the same time of a guttural growl, they tend to just envelop the majority of the sound.
For a debut album, I have to say that the band certainly have a solid foundation on which to build upon in future recordings. The production is pretty clean and crisp for the area these guys come from, and with the exception of the vocals engulfing things at times, I think the sound is pretty damn good. It's not going to win any awards, but it allows atmosphere to be built pretty naturally from the instrumentation while still giving the band that heavy crunch for the low-end breakdowns. What surprised me even more than the production job however was the inconsistency in the tracks. While songs like the title-track or even the Under The Snow trilogy of tracks where long and adventurous, at times quite winding in their structure, the shorter tracks like Punishment For All or Fire The Savior From Plague, the two shortest tracks on the album, where just all brutality, there was still black metal in their mind you, but it just felt so uninspired and frivolous. I understand shorter tracks aren't supposed to be, and usually aren't, the most interesting tracks on an album, but I just couldn't help feeling a bit let down by how mindless these tracks seemed. Those longer tracks are just so much better at accomplishing various ideas, whether it happens to be building an atmosphere and then breaking it down with the stomach-churning breakdown or the other way around.
It's a pretty solid album and one that I don't think I really expected, even based on reading a couple of other reviews for this album. I think the band are certainly talented and I look forward to hearing what they do next to build on this sound. Fans of both black metal and death metal will find something in this record they like, it's one of those records that could actually appeal to both sides.
Overall Score: 8
Highlights: Morok, Under The Snow I, Under The Snow III
Posted by maskofgojira at 9:26 PM