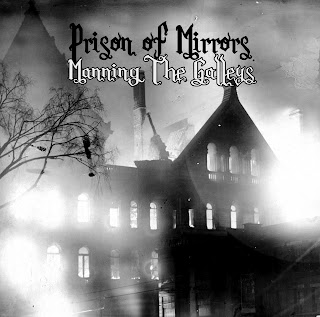 Last year Prison of Mirrors really surprised me with it's debut full-length. Blending the rather formulaic post-black metal clichés with more interesting ones found in the genre's more progressive and atmospheric divisions led to an impressive debut. With this sophomore effort following so closely on the heels of the debut I was wondering how much the ideas had been improved upon within only several months.
Right from the beginning of Desiccation it becomes obvious that main man Nick Brandt has decided to take a less direct approach to songwriting on this album. I don't mean that he decided to get rid of the up-front melodies or aggression, but more that the focus of the production has shifted from having the guitars hit you square in the jaw to adding more depth in the atmosphere. The mood is less visceral and more melancholic, which has made these five songs feel less "intense", which I don't have a problem with (but I guess that's totally relative), as the atmosphere that the album gives off is one of the better examples of melancholy found on an album I've heard all year. The songwriting has also become a lot more focused, trimming some of the fat from the excess of the previous album, and writing songs that are more concise, though still quite long, in their ideas. Even on epics likes Sanctity In Chains or All We Cherish In Embers, the focus is always on the song, and things never fall out of sync or control, which I could see turning some people off (maybe they like that rough edge that causes things to seem on the verge of total chaos), but for this record, it worked more as a positive than a negative. Melody is never sacrificed for brutality, experimentation, or atmosphere on here, which in my mind at least, sets PoM apart from many of his peers who seemingly forget that you can be as dark sounding and weird as possible, you still need to be able to write a good song/melody to keep your listener interested (though with weird you'd still probably get a pass from me).
My biggest problem with the project's self-titled debut was the drum sound, obviously being programmed, it sounded very plastic and unfortunately, overly fake or compressed sounding drums are something that really irritate me. was glad to hear that that qualm had immediately been removed from the equation on here, as the drums do have a more naturalistic sound to them. They're also a bit farther back in the mix, which I think helped to not make them sound as apparently mechanical. Having said that, I can't say that there aren't a few spots where this album did hit a bump that made me sort of scratch my head and wonder about. While most are rather inconsequential, the one that struck me as an odd choice to include was the sort of shoegaze section that is used throughout Galley Slaves. It isn't bad, per se, but it's one of those parts where it's like, I've heard this sort of thing done before and it doesn't really do anything for me. Maybe it's just my fault for listening to too much of the blackgaze sub-genre that I've become spoiled, it's not a flaw, just experimentation. I can respect it, but it doesn't mean I have to enjoy it. Also, going back to the drum programming thing, it occurred to me after listening to this album a couple of times that there wasn't a whole lot of variety in terms of the programming. The slower parts certainly have parts that suit them, but the majority of the faster moments appeared to just blast forward without much diversity. Once again, it's probably just me nitpicking.
It's nice to see a young artist already honing his sound into something unique after only two albums with the will to experiment still remaining. It's not perfect, but if Brandt continues on this upward path, I do think he'll create something really special in the very near future. Definitely check this out if you're a fan of the more atmospheric side of black metal, you will not be disappointed by this album.
Overall Score: 9
Highlights: Sanctity In Chains, Horn of Winter
Posted by maskofgojira at 6:27 PM