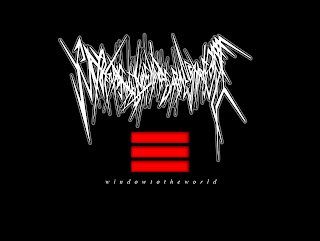 Like I've been saying in many a review for djent bands, the genre is pumping out less and less interesting groups. But, like I've been saying, there will always be groups and projects that stand out from the rest by trying something different. I was always interested in what the fusion of black metal and djent might sound like, so when I saw this band tagged with both, I knew I had to listen.
Now I know that to many people out there, the idea of black metal being forcibly jammed into a sub-genre like djent is probably the last thing they'd ever want to hear, that and it mixed with metal/deathcore, but I was curious. The end result is actually pretty interesting. The guys in this band have obviously taken an influence from the likes of Vildhjarta. It's like a wild concoction of black metal's bleakness and vocals, djent's heavy rhythms and grooves, mathcore's spastic riffs, and post-rock atmospherics and clean sections. It's a totally bizarre sounding fusion of ideas that actually manages to work. I figure a lot of people, after listening or skimming through this album will say that there isn't even any black metal on it. That's debatable only because, yes, there are very few riffs that actually recall the black metal genre, but there are some ideas scattered throughout the album that do bring to mind some of the genre's more weird bands. I think that this might be more tolerable to some know that this is a mainly instrumental record, with vocals popping up very seldomly throughout the majority of the record.
I have to say that unfortunately the album is not great in the way of consistency though. While early songs blend the above genres and some others together in a way that is very disorienting and somewhat offputting manner, the quality drops on the second half as the band begin to abandon that in favor of more spacey post-rock ideas. Maybe it's just me, but no matter how much I enjoyed The Sanest Sentence or Glowing Stars, I think that it may have been a mistake to allow them to be as extended as they are. While the latter track at least opens with some of the more frenetic guitar grooves that were showed off on the first couple of tracks before diving into post-rock ambiances, the former dwells completely in that space. I don't have a problem with the tracks inherently, but I do wish that the band could have written more metal tracks than experiment so fully with post-rock. I know I'm coming off a bit harsh here but it's only because I do feel like the band may have devoted more time to those sections that the metal ones. After opener Riddle Me This, the metal tracks begin to decrease in quality for me. Tracks like Torchlight and Antitune feel like the band was just trying to be as weird as they could, throwing in all sorts of keyboard effects and weird guitar and vocals ideas that just don't work. Those post-rock sections, by comparison, are far more focused and captivating. Even though it is primarily a post-rock driven track, rather post-metal, Who Are You? is probably one of the best examples of the band performing to their strengths by combining those extended post-rock sections with some heavier (though certainly nowhere near as spastic) parts, though I do wish those parts were as extended.
The end result is a really schizophrenic album that is sure to intrigue, annoy, and baffle just as many people as many people who will be blown away by it. Some tracks feel more like exercises in weirdness than actual songs, but when the band actually throws out a song, it's at the very least interesting. If you haven't already been turned off by the idea of the fusion of the above genres, check it out, otherwise avoid at your own risk.
Overall Score: 7.5
Highlights: Riddle Me This, Who Are You?, Glowing Stars
Posted by maskofgojira at 11:53 PM