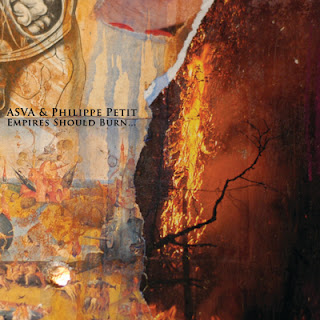 I've been a fan of Asva since I first heard their 2008 album What You Don't Know Is Frontier several years back. This is my introduction to Philippe Petit though, having never heard of him before finding out about this collaboration. After 2011's Presences of Absences album though, I guess I shouldn't be surprised that Stuart Dahlquist has decided to branch the Asva name even further outside of the drone-doom box he first carved for himself back in the early 2000s.
I like Asva, I mean, they're not exactly my favorite of the drone-metal groups, but I do enjoy what they do and will occasionally go through bouts where all I listen to is the desert doom they did on their first two full-lengths. Personally, I still hold 2008's What You Don't Know Is Frontier as one of the best drone metal records I've ever heard, but after the more psychedelic and less metallic reinvention, of sorts, of their style on Presences of Absences, this collaboration doesn't feel quite so unfounded. Abandoning most, if not all on the majority of these tracks, metal traces from the Asva half of the collaboration, what remains is one droning epic the likes of which I can't say I've experienced before, and five smaller pieces that do well to live up to the twenty-three minute opening title-track. Let me tell you that opening a record with a track that long can be, and in this case was, quite an overwhelming experience.
This is a record of subtlety. Like I said above, I am not familiar with Petit's work but Dahlquist's work with Asva has always held large amounts of subtlety - and I know that came out sounding a little awkward. I've listened to this record many times by the time I'm writing this review and I've tried to listen to it in various ways. The first couple of times I played this, it was merely as background music, something that's on that will draw my ear every now and then while it's playing, which is how I usually approach drone and ambient records at first, and it was an interesting thing to really do. With a lot of the music I listen to, even in the background, I feel like if there's some sort of calm or a sort of tension that it should build to something, but no explosion of sound came while listening to this. I probably listened to this thing three or four times before I finally figured out that there were points of escalation on here. It was not just a static idea that very minimal ups and downs, but is in fact, if you actually listen, quite a tense and brooding little rager of an album. It builds in those respective areas very, very slowly and without really making you aware of it. I don't mean for that to be interpreted as it being dull or boring, on the contrary in fact, this is record filled to the brim with depth and ideas that should be more than enough to keep people listening in.
I guess my problem with the album is that the opener is such a slow burner that the five following tracks feel almost rushed in comparison. Make no mistake, they're all really good and interesting tracks, except for maybe A Vision, which I did find to be just a little bit irksome at times, but I think that starting the album with such a powerful and monolithic track as they did, the rest of the tracks just sort of pass by without leaving as strong an impact. Having said that, I did find that when I listened to the five tracks on their own, either just skipping past the opener or putting the album on shuffle, they did feel a lot more complete.
I really wasn't sure what I was going to end up with on this record the first time I put it on but by now it's really become something special. I think it's a really interesting album that definitely has it's own vibe going on. It's a hard album to really access at first but given time and effort it will reveal itself to be something that you'll definitely want to hear.
Overall Score: 8.5
Highlights: And Empires Will Burn, The Star Implodes
Posted by maskofgojira at 3:59 PM