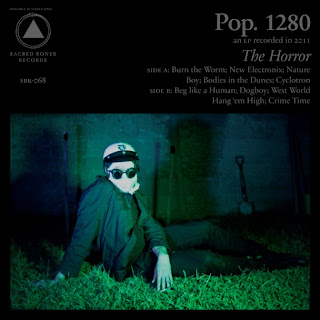 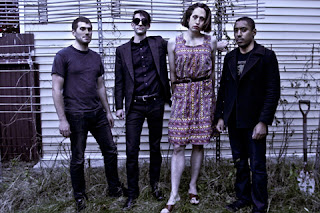 This wasn't something I thought I was going to cover a couple of months ago, but after listening to a track from the album, my interest was caught. I was aware of the album, initially, from a few reviews, so I was peripherally aware of it, but didn't really think much of it. I figured that since I was doing more of this noise rock oriented reviews, now was the best time to maybe introduce someone to this.
Now, in my review for Pigs, I make the argument for really enjoying noise rock with energy, the stuff that makes you feel alive, and that it takes skill to keep that energy maintained throughout an entire album, and that is not the case on here. With that being said however, I'm certainly not opposed to the more arty side of the genre, especially since this album does have a pretty healthy dose of post-punk and goth rock thrown into the mix as well. I'm a Sonic Youth fan, I think Big Black is a pretty solid fan, and while I don't have much of a tolerance for the likes of Fugazi or The Jesus Lizard, I can certainly respect them, thus at the very least, I do respect what Pop. 1280 are doing. They're playing a style that is very focused on groove and noise, but it's not so arty that they happen to forget the meaning of a song. They write three-to-five minute long rock songs that just groove, though some of the longer songs are more taxing to listen to.
I have to say that for however impressive the band are at writing and sustaining an interesting groove for an entire song, they really don't leave much in the way of memorability. I am in no way saying that these are bad songs, but aside from a few songs, Bodies In The Dunes and Dogboy for example, most of what's on here is just in one ear and out the other without leaving much to remember. I mean, I remember the bass work being really well done, it provided the groove and was very foundational on a lot of tracks, I remember the guitars being pretty varied, going through both standard guitar chord moments as well as more frantic and noisy dissonance being intermingled, and I remember the vocals being fairly one-dimensional. All of that stays in my head long after the album ends, so the band definitely left an impression on me, but the problem is that I don't really remember a whole lot of songs. Their experimental tendencies displayed on a track like Beg Like A Human is certainly engaging, and pretty enjoyable, but is pretty lackluster when it comes to doing anything interesting. The minimalistic ideas present throughout is something I like, but after about two or three minutes, I've kind of lost interest, I'm sorry to say. I happened to prefer it when the band kind of just had a groove going, they didn't particularly take a whole lot of risks, but they just had these vocals lines that stuck with you because they were repeated so often and the instrumentation wasn't all that impressive (I'm aware that doesn't sound like a good thing, but it should make sense when you listen to it). In the end, it's just a mixed bag of an album.
As a whole, the album is just alright, not great, but it is enjoyable while it's on. I really do like the ideas and sounds that the band is playing with throughout and think that if they just started focusing a bit more on songwriting, they could really do great things. If you happen to dig noise rock or post-punk, I do think you'll find something on here worthwhile, even if it's not the whole thing.
Overall Score: 6.5
Highlights: Bodies In The Dunes, Dogboy, Hang'em High
Posted by maskofgojira at 11:53 AM