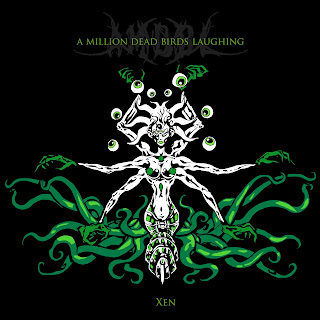 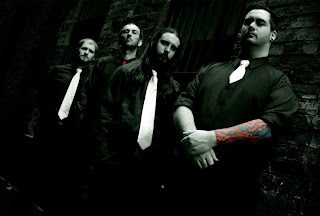 I haven't covered a whole lot of grindcore this year (mainly because I haven't heard a lot of good albums). I was unfamilliar with AMDBL before listening to a track from this album on Youtube, but was more than impressed with it. What's weird is that I had only heard of the band earlier that day and thought nothing of it.
Now, when I saw the tag of "experimental grindcore", what usually comes into my head is a band like Gigan, who I really don't have more than a passing interest in. No matter how technical or spastic those bands are, they really don't interest me all that much, but that is not what this is at all. I was really shocked when I listened to this and it sounded like Dillinger Escape Plan mixed with Napalm Death, musically, while vocalist Adam Stewart was, essentially, bouncing off the walls, not so much screaming or growling, even though he does that as well, but singing. The sound of his voice really reminded me of Bjørnar Nilsen of Vulture Industries, who I am a big fan of, while his vocal acrobatics were more in line with someone like Mike Patton, who I am a fanboy of, so that immediately landed him on my good side. But perhaps I'm focusing a bit too much on the vocals, because saying that musically it blends the above two bands together is still pretty vague. Even TDEP is pretty varied throughout their albums. The instrumentalist are skilled in mixing tech-death, grind, and stuff of that variety with more jazzy interludes, melodic phrases, doom inflected sections, and left-field ideas (the whistling that closes Zombie was a pretty weird choice to close out the album if you ask me). The fusion of experimental instrumentalists with a mad vocalist, and I mean that in the best possible way, leads to a sound that I am not only a fan of but am also quite sure I have yet to hear anywhere else.
Now, no matter how experimental or melodic the band is on here, their sound is still rooted in the realms of grindcore, so the majority of tracks on here are still under the two minute mark. What that also means is that a lot of these tracks also have the tendency to blend together, which I do think hurts this album because even when every track is doing something just a little bit different, it's like punch in the face, punch in the face, punch in the face, ok, longer track so it's a bit more melodic. I would have liked to have heard the band write longer tracks because they've shown that they can write interesting songs that are over the two minute mark, listen to both Terminal or the title-track for a good example. I can't help but feel that for all the intensity the band deliver with their short bursts of aggression, they actually have a strength in songwriting, which is more than I can say when it comes to other grind bands. These guys can actually string together a good and well-written song when they want to, and I actually just want more of that. Short bursts are great, but I don't think they should ignore a strength that they so obviously have.
Regardless of my complaints, as a whole, I do think this is a really great album, and one that proves you can still do interesting things in the grind genre. This was a big surprise for me and I'm really glad I decided to check the band out. Definitely worth checking out if you're a fan of experimental metal in general, as well as if you're a grind or tech-death fan.
Overall Score: 9
Highlights: Beast, King, Quantum, Xen
Posted by maskofgojira at 3:46 PM