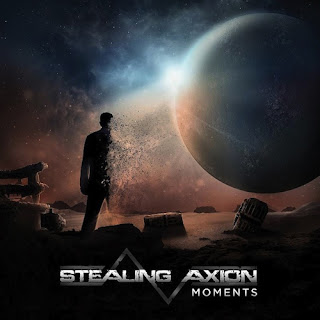 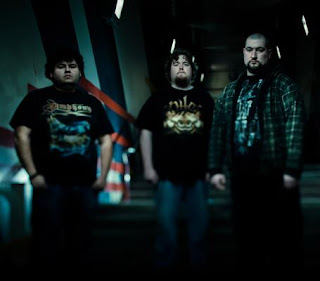 I first heard about Stealing Axion a couple of years ago through their self-titled EP which was actually really good. The ideas they utilized were pretty refreshing in that their sound was both a part of and separate from the djent sound. With this full-length we finally get the realization of what the band can really do.
I guess the first thing I should point out is that all five songs from the band's self-titled EP do appear on this full-length, though I'm pretty sure they've been remixed. My opinion of those five songs was pretty high, not only because I do happen to enjoy djent, but the fact that the band fused together this semi-djent sound that definitely came from the likes of Meshuggah, but fused it together with this Devin Townsend-meets-TesseracT ambiance that just brings this sense of beauty to the background of the tracks. I'm not sure how long the band had been together before they released that EP, but by then they had already developed a pretty strong sense of songwriting, with a song like 47 Days Later being a solidly aggressive track from start to finish, Eventide was very melancholic and melodic, having more ups and downs. The point being that they were experimenting with ideas while still having a unifying core, which is something that I definitely give them credit for. The other three tracks happened to dwell more in the middle realm in between those two.
Now, those five songs really haven't changed, I knew I already liked those songs, but it's the six new tracks that are really where the party is on here. Sure, the style isn't all that different from what the five tracks from the EP set the groundwork for, but there is far more exploration of expansive atmospheres and "traditional" progressive metal song structures. The reliance on those djent ideas becomes less and less prominent, with melody becoming increasingly prominent as the album progresses. While I'm not huge on the first half of Solar, I think that it's closing minutes are really, really good, straight-up, modern prog-metal and I think that that second half is more indicative of where the album goes in its second half. I guess I should make it clear that to say there is no djent after the halfway mark would be incorrect, as a track like Collapse will demonstrate, that is certainly still a vital part of the band's sound, but it's not the main focus. Obviously the biggest focus of my own attention, and I'd assume many others as well, is the two part, closing title-track, Moments. These tracks deliver what I'd imagine every fan of progressive metal (and it's various sub-genres) would want from a track. You have the chunky metal parts, which come in djent and non-djent for those who were wondering, really melodic sections, long and winding instrumental passages, and huge sounding ambient ideas creeping up throughout both tracks. Part one includes nice moments of sludge and death metal which really didn't show up too much throughout the rest of the album but work really well in the context of this extended track. Frankly, it's everything that I would want from a progressive metal song.
I really think the band's sense of atmosphere is one of the reasons why they stand out so much in the prog and djent world. That backdrop is just huge sounding, but I don't know if I'd ever go so far as to say that this could be called "ambient metal" of any kind. It sort of reminds me of the Terria record from Devin Townsend, but not quite as organic or earthy sounding. There's an almost lazy quality to it, and I don't mean that as a negative, but it's very melancholic and withdrawn vibe that really accommodates to whatever else the band happen to be doing. It also really works with the clean vocal used throughout as they help to bring a real sense of emotion and passion that might otherwise not feel quite as powerful. On a side note, and I only bring this up because I am a total nerd, for those who know about it, does the piano melody on It's Too Late Now remind anyone else of the closing theme from the anime series Trinity Blood? It might just be me.
Even though I wasn't crazy on this album on my first listen (I think it was more my state of mind than a problem with the record) I have grown to really enjoy this full-length. I think the band are doing something different from their peers and that stands out in the modern prog-metal world. I highly recommend this album if you happen to dig progressive metal, in general, I think you'll really enjoy this.
Overall Score: 9
Highlights: Eventide, Moments I, Moments II
Posted by maskofgojira at 12:41 PM