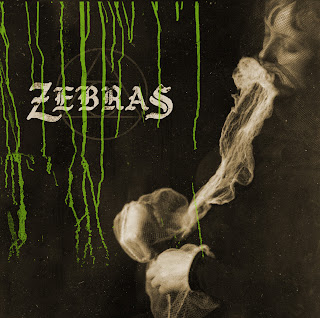 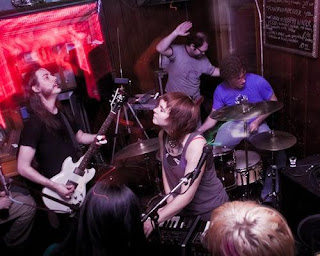 I get surprised by bands quite often, so it really shouldn't come as any surprise when some random album just appears (in this case by the band). I often enjoy it when I get/find some random album and it's just a breath of fresh air from what I listening to at the moment. This was one of those albums (if you couldn't already tell).
I have to say, based on the name alone, Zebras, I was a little iffy about this when I was first sent it, but pretty much five seconds into the song Black Cancer and I was sold. I don't listen to a whole lot of noise rock, I'm simplifying here, but what I love about the style it the attitude, not like hardcore or punk where I love the energy, but the attitude. I love it when you can just hear the snarl and the spit coming forth from the vocalist. It just has so much passion, and energy, in it that I just can't ignore it. It's vibrant, even when they're playing more of a sludge based song, it's alive and things just feel like they're moving. The attitude of just playing with everything you've got, I can almost feel the intensity with which these guys are playing their instruments. In addition to that, I'd also like to throw the quirky card into the circle as well, as these guys certainly have a bit of that in their performances as well. It's just a "yes" moment for me.
This is a short album so I guess it works that pretty much every song maintains the energy in some way or another. Luckily though, this is not a one-trick pony style band, they're not just playing noise rock. Sure, I'm using that as sort of the overarching style but to be more specific, there's elements of punk, sludge, thrash, and krautrock mixed in throughout the record in various forms and degrees, and I just love it for that. To fuse all these styles together into something that doesn't come off as either over or undercooked is commendable into and of itself, but the band know how to write a good hook as well. Whether it happens to be an actual vocal hook from a chorus or verse or something or a hook provided from the rhythm section, which I'd argue there's more of on here, there's something memorable in nearly every song. The keyboards were probably the biggest surprise to me while listening to this album because, you know, I expected a high energy punk kind of vibe from these songs, but a lot of these songs bring keyboards in and make use of them in a very krautrock like fashion and it sort of took me aback when I first listened to it. Even if they're not providing a huge part in a song, they still spice it up with some interesting, sometimes glitchy, effects that make the band all the more amazing in my eyes. In addition to that the bass guitar has some really nice grooves on here, which is why I think that the rhythm section has more hooks than the vocals do, with tracks like Queeny Gloom Doom or Diablo Blanco really bringing out that krautrock vibe while a track like The Mighty Bayonet demonstrates a more jazzy style through tapping sections. While I do think that Vincent Presley are a bit too winey for my own taste, they didn't really make me cringe or provide too much difficulty when listening to the album, once again, because of the attitude and passion I could make out from what he was saying.
It's a fun, up-beat, and catchy album that is just full of interesting and cool songs that bring the good times around. While I don't think it's perfect, for what I was expecting, it really surpassed any and all expectations. Definitely check this out if you happen to enjoy weird but catchy rock, metal, or punk, really anything that has spunk.
Overall Score: 8.5
Highlights: Queeny Gloom Doom, Black Cancer, The Dirty Dice
Posted by maskofgojira at 2:34 PM