An Autumn For Crippled Children - Only The Ocean Knows (2012) 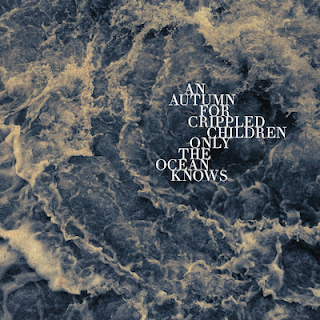 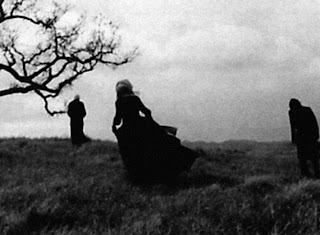 I guess by now I've become a regular promoter of AAFCC since I've covered all three of their albums (including this one) now. They're a lot more prolific than a lot of other black metal oriented bands tend to be which is a little surprising. I wasn't even aware this album was coming out until it was sent to me.
I wasn't really sure where the band were going to be taking their sound after last year's, Everything, album. That album had the band trading in black metal intensity for a more traditional shoegaze, or blackgaze, fuzziness and atmosphere. It was not a very aggressive album, and while it still featured screamed vocals, pretty much everything else on it reflected a greater influence coming in from the realms of shoegaze, post-punk, post-rock, and even synth-rock. By comparison, their debut, Lost, was a fuzzy piece of atmospheric, if slightly depressive, black metal. I just assumed that the band would continue down the more "accessible" path until they would rid themselves of their black metal background completely, maybe even hit it big one day with an album, but I guess not. With this album we see the band embracing both their black metal roots and their more recent shoegaze tendencies, finding a middle ground between the two without coming off as an Alcest or Sleeping Peonies rip-off. Though Sleeping Peonies is one of the closest comparisons sonically. The fusion of these sounds is not going to shock anyone, though I will say that given what this trio are actually doing with it, I do think they're giving the genre some new energy. It's not original, but they have something there that makes them stand out, makes you (or at least me) interested in seeing where they're going.
While the somewhat poppy melodies and driving bass-lines move the songs forward, the guitars are a bit more distorted and the vocals are just a little more up-front than they were on the last album. I don't know if you could say it's a complete re-embrace of the band's black metal roots, but I would definitely say it's a more "aggressive" album than their last. To an extent, I'd would even say this has the best band dynamics on an album, with a couple of tracks having a pretty clear division between the more danceable (that's right danceable) shoegaze parts and the harsher metal ones. I do sort of wish that the band had brought in more of the blasting that they had on their first album, if only to bring some sort of intensity to these songs. Quite a few songs make regular use of dance-beats, or at least beats that I find danceable, hear This Garden These Tree for example, and I just would have liked to have heard the band ramp up the velocity a little bit more. However, I do have to applaud the band for going out on a limb and at least trying to try something different, in the form of In February, which is the closest thing to a power-ballad I've heard from a band in this genre. It's a very post-rock inflected track, but it has those keyboard textures that made it feel more like a ballad than the other tracks. Before I forget, I do need to say that if there was anything that I think the band have a handle on, it's synth. Throughout the album, the synth and keyboard textures, and occasional melodies, are really well done. They're simple, but really help to set a mood underneath all the distortion.
Obviously this isn't going to be the sort of record for everyone but it does hold quite a bit of merit within the genre. It's not going to blow anyone's mind, but for what it is, it's an enjoyable album from a band that is slowly coming upon a sound all their own. I think that if you enjoy blackgaze or depressive black metal (on the extreme side of things) or if you happen to dig post-rock, post-punk, or shoegaze (on the less extreme side of things) you'll find something on here worthy of your time and attention.
Overall Score: 8
Highlights: Yes I Know... Love and Death... Always, Only The Ocean Knows, The Rising Tide
Posted by maskofgojira at 4:02 PM