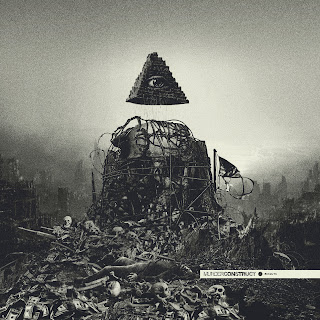 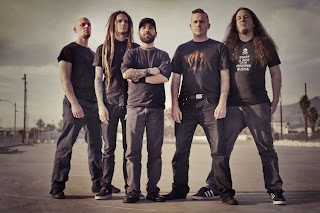 I can't think of a grind album that has been more anticipated this year than the debut full-length from Murder Construct. Maybe it's just that I haven't heard too much in regards to grindcore this year, correct me if I'm wrong. With members from the likes of Cattle Decapitation, Phobia, and Exhumed, expectations were set pretty high after 2010's self-titled EP.
I will say right off that bat that despite Travis Ryan being a great vocalist, and one of a very few selection of vocalists who I actually enjoy their toilet-bowl gurgles, I don't think his performance on here tops what he did on the most recent Cattle Decapitation album. He tends to stay within his typical range on these songs and doesn't really break any new territory, vocally, for himself. It's a solid performance, but after what I heard from him on Monolith of Inhumanity, this just feels sub-par to me. Along with that, am I the only one who thinks that his delivery on Mercy, Mercy is eerily similar to that of a Cattle Decapitation track? As for the rest of the band, when it comes to the drumming, Danny Walker has yet to fail to impress me. He blasts, grinds, grooves, and drives these songs into the dirt and then further down with the intensity and power he plays with. I think he is easily the star of this album. When it comes to the guitars, and bass, I can't really say much more than they deliver. I mean, after what guys like Erik Burke and Michael Kenney have done for the grindcore genre in recent years, this just doesn't do more than hit the bare minimum for me. It's well done, but it ultimately leaves a lot to be desired in the realms of originality.
What this album does deliver however is what all good grindcore albums should by their very nature provide, intensity. Like I've said on numerous occasions, and will continue to say, grindcore, much like punk, hardcore, and to a lesser extent, noise rock, should exude a sense of energy. While this record is pretty clean sounding, personally I would have liked a bit more crust and dirt on the mix, but that's just me, it still drives forward with about as much subtlety as a soccer horn most of the time. It just bulldozes over the competition and is over before you know it even started, with the majority of tracks on here hovering around the two minute mark, that should really come as too much of a surprise. Tracks like No Question, No Comment and Feign Ignorance are prime examples of how a good grind song should be written, with no intention of slowing down but by conveying a sense of dread (though that is more personal) with a kind of atmosphere. The only time you really get any sense of originality on here is on the closer, Resultados, in which the band invoke some ideas Walker has used in his work with Intronaut. While I can't personally call it the most exciting thing, and it does sort of end the album on a bit of a sour note, it's certainly an idea I think could be expanded on should the band decide to record more material.
Overall it's just sort of a mixed bag. I could have used more originality or some better songwriting, but for the style that the band is playing, it works just fine for a first full-length. Grind fans will not be disappointed by this one.
Overall Score: 7.5
Highlights: Gold Digger, The Next Life, Resultados
Posted by maskofgojira at 12:01 AM