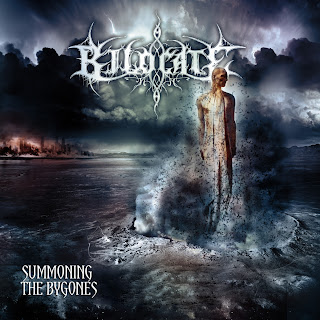 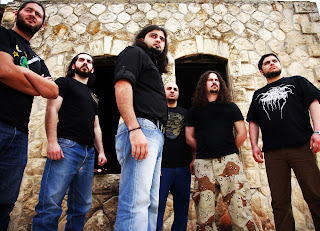 I have been peripherally aware of the existence of Bilocate for something like two or three years now because of a short interview they happened to do for a magazine that I used to read (I don't remember the name off the top of my head). They were one of those groups who I was sort of curious why no one else had really covered them (that I had seen at the time). I'm glad that they're finally getting a lot more press thanks to them moving to Code666.
I have to say that I'm glad the band don't try to come off sounding like some third-rate Opeth ala early Katatonia sort of band, which this very well could have turned out sounding like, and instead bring their own color to the sound. They definitely don't make an attempt to hide the influence from their country, as the opening guitar line on The Tragedy Within definitely reflects that Egyptian flavor that most certainly comes through in the traditional music of Jordan. Along with that, the influences from groups like the aforementioned Opeth and Katatonia, along with some healthy doses of Edge of Sanity, the obligatory Paradise Lost (found in their cover of Dead Emotion), and even a little bit of Emperor, the classic sort of stuff. The stuff I'd definitely hand over to a person who wanted to start a progressive extreme metal band; and that's not to undermine the band's sound because they've certainly chosen themselves a very solid and diverse range of influences to draw upon and I definitely enjoy hearing them all being intermingled with each other in ways that other bands don't come anywhere near to achieving.
Of course, I can't talk about this album without at least mentioning the presence of the man himself, Dan Swanö (a personal favorite of mine). The three tracks he provides clean vocals for really do stand out as some of the better ones on the album, and it's not even his appearance that raises them to that level (in case you were wondering). Though his powerful baritone voice certainly does make the more melodic moments feel a wee bit more foreboding and epic. Aside from his appearances, the vocals are kept within a standard sort of death metal growl. In all honesty, when it comes to expressing depth, the death growl is sorely lacking in expressing much more than various degrees of anger, so in that regard that growl only dynamic does hurt the overall product. Having said that, I actually found Ramzi Essayed's growls to be well done and they had a sort of timbre that I tend to have more fondness towards. So, I wish that the vocals from him were a bit more dynamic, but because I actually like the sound of his growl, I can accept it for what it accomplishes. It's only because the music backing the vocals is so dynamic that I wish the vocals would follow.
As I have said numerous times in the past, and will say it many times in the future as well, I love long songs, but to be a bit more specific, I love long songs that are interesting and that work. This album is littered with long songs, with half the album's tracks hovering somewhere around the nine minute mark, but it's the last three tracks, the A Desire to Leave trilogy that really got me excited. These are the sort of ideas that I really love hearing in progressive bands, tracks that ebb and flow back and forth from calm and tranquil beginning into epic sounding instrumental passages and then into brutal death metal ones. The three tracks manage to flow into each other without much trouble, but the thing that struck me the most was that each had its own identity, Obscurity is an intense, progressive burst while Surrounding Hell is a more melodic track that favors more of an instrumental route and Of Leaving is the soft closer that makes full use of Swanö's powerful and emotional voice. As a whole, it is the most well crafted piece on the entire album and is hopefully a sign of things to come.
It's a really well crafted album with a lot to offer fans of more progressive leaning metal. While there are a couple of things that bothered me about certain tracks, there was never a point where I disliked what I was hearing. Definitely check this out if you have not already (which is unlikely based on the reviews I've seen/heard for it).
Overall Score: 8.5
Highlights: A Deadly Path, Hypia, A Desire to Leave - Surrounding Hell
Posted by maskofgojira at 1:28 PM